Read it around 1978-9. Wizard plucks an M-113, about to be RPG-d from the jungles of Vietnam, with its crew and dumps it into a medieval hack and slash land with various non-human races and some magic.

The new king there is near-sighted and wasn't anyone's first pick when his dad died, but he ends up doing a good job. I believe the APC meshes in with the whole war of succession bit.

The US soldiers have a number of adventures, eventually barely kill a dragon (wizard had aimed for a tank, not an APC) and get sent back home, 10 seconds earlier, where they expect the unlucky RPG gunner and nuke his butt.

There was a second book as well, tank commander goes back to live in sword and sorcery land, but I don't think the author did much else after.

"The Doomfarers of Coramonde" by Brian Daley. Possibly a duplicate of this question.

The plot is pretty much as you describe along with a sequel, "Starfollowers of Coramonde".

Just yesterday, Sergeant Gil MacDonald and his APC crew had been fending off an ambush in a Viet Nam jungle. In the middle of the firefight, some kind of magic spell had transported them to this Fantasy Land complete with flying dragons, wizards, crazy castles, and dispossessed princes. They would stay trapped here forever unless they could rescue the sorceress Gabrielle. Master magician, Amon, held her captive in his palace; and to reach her, Gil and his men would have to infiltrate Hell itself. 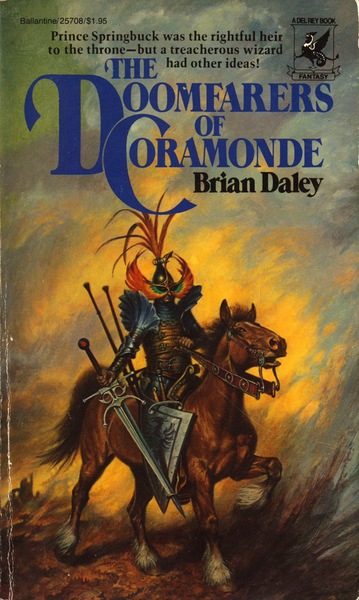 The blurb on the back cover:

Twenty-four hours ago, he and his men had been fighting off an ambush in a Viet Nam jungle. Now, thanks to some kind of magic spell, they were in the middle of this Fantasy Land that was filled with flying dragons, wizards, crazy castles and dispossessed princes.

They were trapped here permanently, too -- unless they could rescue the sorceress Gabrielle from the clutches of the master magician Amon. She was being held captive in Amon's palace; and Amon's palace was in Hell itself!

So all they had to do was find a way into the Inferno, battle Amon and all his monstrous minions, and them somehow escape with the sorceress. Sweet!

But unless they did it - and did it quickly - they were doomed to stay in Fantasy Land forever!

11
Man from Earth kidnapped to less advanced sister planet where he fights and rides a giant bird
15
Book - Man returns from Vietnam and opens portal to another world with his ham radio
9
Please help identify a short Sword and Sorcery story about a city of torturers
5
1970s book - armored vehicle crossing desolate land stopped, protagonist continues on on foot
7
Japanese anime movie, includes a sword and some gems, and a dragon-like friend
6
Story about princess, prince and dragon running away from kingdom, comedy
12
Sword-and-sorcery flick from the 80s with a magic scarf that saves the hero's life
17
Sword and sorcery short story with a wizard carrying an infant in a backpack that actually is a parasite
9
Trilogy from 1990/2000's with men and women sword fighters