What is the metal thing on Picard's head in Violations?

In TNG 'Violations' (S5 E12) Doctor Crusher is forced to relive the experience of Picard revealing her dead husband to her.

While they are walking down the corridor you can see a metal device attached to Picard's temple. 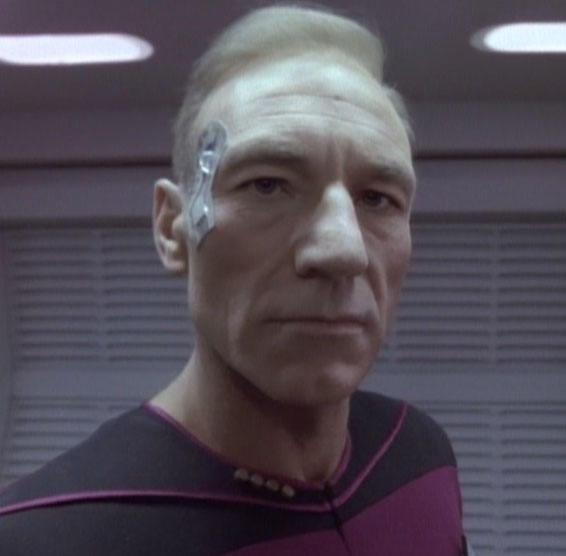 What is this device and what does it do?

It's a futuristic bandage. This is from the script for the episode, with bolding mine:

Martin EXITS and Beverly keeps working, engrossed in the monitor.

jarred by the remembrance, trying to concentrate on work once more.

A body on a bio-bed, covered by a sheet (or 24th- century equivalent).

sitting upright in her chair, frozen with shock as the overwhelming memory sweeps over her.

A younger Beverly -- with a different hairstyle -- and a younger Picard, she in civvies and he in "Stargazer" uniform. His head sports a bandage. The two walk toward a body on a gurney, covered by a drape.

PICARD You don't have to do this...

62
What's the origin of Picard's signature phrase, "make it so"?
26
What are the orange plates on Picard's desk?
16
What genuine references are there in Voltaire’s "U.S.S. Make Shit Up" song?
11
How did Picard send a binary message to Data in the future?
1
Why didn't they just transport Tosk out? Why did they wait for him to be released?
14
What else is in the little room in Picard's Ready Room?
16
At what point and why does it become (almost) impossible to transport through shields in the Star Trek Universe?
3
Are Star Trek ships female or neutral?
24
Why was conn held by low-ranking officers?