How fast were the X-wing fighters flying in the trench during the Battle of Yavin?

"We're going in, we're going in full throttle, that ought to keep those fighters off our back!"
—Luke Skywalker

During Luke's attack run on the Death Star during the Battle of Yavin in A New Hope, we see his target computer counting down numbers, presumably distance to the target, until he switches it off.

Do we have any indication of how fast he was flying, either through this or from other clues?

Was that any different from the speed of the group of Y-wings or the first group of X-wings?

The countdown numbers on the targeting computer give us a metric to calculate the speed of each attack run. By simply looking at the amount that the countdown has dropped in one second, you can work out the speed.

On a related note, the X-Wing is supposedly capable of a maximum subluminal speed of 100 MGLT (megalight per hour).

Assuming a megalight is 1 millionth of lightspeed (1000 kph) then the top speed for an X-wing in free space would be 100,000 kph or approximately 2700 m/s. This would imply that Luke was at about half-throttle at the end of his attack run. 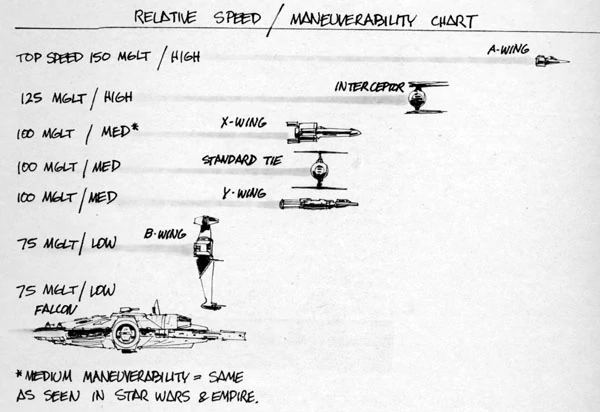 The only place where I remember seeing any mention of speed for X-Wings, or any Star Wars starships in general, has been on the various RPG resources published over the years, which are surprisingly coherent on the subject.

According to both that Star Wars D6 Core Rulebook edition 2.5 (page 249) and the Star Wars Saga: Starships of the Galaxy supplement (page 152) , X-Wings have a maximum speed of 1050 km/h.

Y-Wings are slightly slower at 1000 km/h, while the standard Tie fighter seen at Yavin (dubbed Tie/ln in the RPG supplement to avoid confusion with other TIE models) can reach 1200 km/h, making Luke's assumption rather dubious.

While speeds are never mentioned on-screen, we do see the squadron of TIE fighters led by Dark Vador gain on the Y-Wings and X-Wings running up the trench, even though they flew at top speed, proving that the standard TIE fighter is indeed faster, though not by much given how long it took them to catch up with the Rebel crafts.

18
Is the Death Star’s gravitational force strong enough to hold an atmosphere?

52
Who was flying the Y-Wing when the Death Star exploded?
35
Why is Leia okay with being tracked to Yavin?
10
How many X-Wings were sent out and lost in the final battle in “The Force Awakens?”
12
Who first had the idea to help destroy the Death Star - Chewbacca or Han?
39
Why did Luke leave Owen and Beru's remains?
7
Fighter cover during Death Star trench run
24
Where have all the Y-wings gone?
51
What made the Tusken Raiders unable / unwilling to shoot down Luke's Landspeeder?