Are superheroes with super-speed saving people all the time?

Occasionally you'll see superheroes with super speed (Superman, The Flash) zoom around, fixing a whole bunch of potentially dangerous scenarios without anyone noticing. Can the Flash see the future now? has a good example.

Is the implication that these heroes do this all the time? It seems counter to the idea of superheroes for them to do it only when they feel like it. However we don't generally see them doing it all the time - is it happening between panels? Has there been any in-universe comments to that extent, i.e. a superhero sighing about having to avert this minor situations all the time? At some point surely they'd run out of time to do it.

Not a complete answer, but there was an issue of Action Comics (umm, I guess around the early '80s) that was kind of "a day in the life" - it featured Superman trying to transport some critical medicine across the world, to save some sick kid's life.
Should have been easy... but he kept getting interrupted by these "minor situations" all the time - either an earthquake, a flood, or a kid stuck in a tree - and eventually, he got there too late, and the medicine was no longer viable.
(Being a Superman story, of course, the villagers he saved were able to point him to a rare plant that grew behind the village that was able to simulate the medicine...)

My point is that yes, apparently this happens all the time "off screen", it's just usually not part of the story... except for when it is.

It depends on the superhero and the nature of their superspeed.

Superheroes who have superhuman reflexes:

Example: Bronze Tiger is out walking his mastiff and a foul ball from a nearby playground escapes the playground and is about to hit a small child. Being a good distance away, he spots a nearby soccer ball, and with his enhanced reflexes and martial skills he blocks the errant baseball with a well placed kick of the soccer ball. No one is sure where the soccer ball came from and Bronze Tiger continues his quiet afternoon.

Heroes with Superspeed who are not speedsters:

Example: Superman may be moving through a neighborhood on his way to a fire. He sees a gunman about to shoot a policeman. He disarms the gunman, at superspeed, so the gun simply disappears from the gunman's hands. The former gunman is promptly arrested. Superman does not stop and all that is seen is the resultant gust of wind from his passage. But if he is in Metropolis, everyone knows what just happened.

Example: DC Comics took this idea to a horrifying extreme in the Kingdom Come series when the Flash, in an effort to keep everyone in Keystone City safe, uses his power to patrol at superhuman speeds, a nonstop force for justice, preventing crime and accidents though out the entire city, living between the ticks of a second. 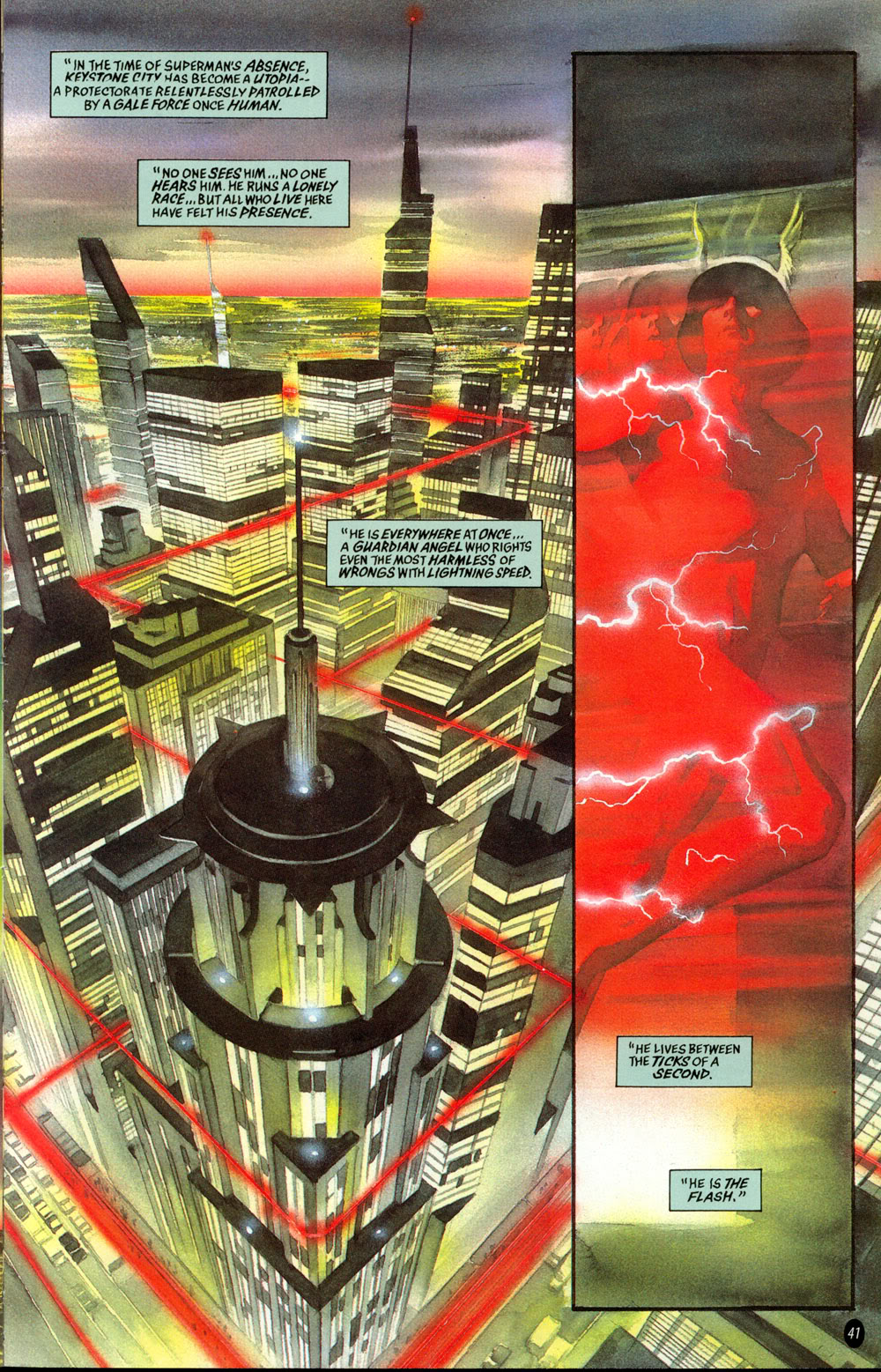 Not the answer you're looking for? Browse other questions tagged dc comics superman the-flash or ask your own question.

20
Can the Flash see the future now?

19
How does the Flash breathe while utilizing his super speed?
56
Why doesn't The Flash's speed kill the people he saves?
8
Do superheroes/villains like Quicksilver or Flash with super speed get tired due to running?
7
How did The Flash originally obtain Super Speed?
4
Can the Flash use his powers and super speed without the speed force (e.g. outside the DC universe)?
26
Are all Kryptonian objects “super” under a yellow sun?
7
Looking for a comic with a Race to the End of Time?
9
Superman's Morality: Has the idea that his morals are in a sense also super been discussed?
29
Who was the first super hero with super-speed powers in comics?
8
70s-80s DC comic in which a demon devours a man in a Superman costume