I remember watching this movie in early 2001-2002. Some of the scenes I remember in that movie are:

This is most likely The Hitchhiker's Guide to the Galaxy (2005).

The scenes you describe are:

An alien who lands on Earth to help fill out the Hitchhiker's Guide (in-universe) book takes the name of Ford Prefect, because he believes cars to be the dominant lifeform on Earth. As such, he attempts to introduce himself to one, but Arthur ("hero"/main protagonist) saves him.

This is the plot of the film. The Earth is destroyed to make way for an hyperspace bypass, which Ford knows about and saves Arthur. Arthur doesn't like that it was destroyed and wants to fix it. The movie ends with

Arthur landing on a planet that builds other planets, and finds a man who agrees to "turn on" another Earth he'd already built. This triggers a rapid scene of Earth going through evolution to return to where it was at the beginning of the movie.

Hitchhikers Guide to the Galaxy (2005)

As others have since answered, it very much sounds like your remembering the 2005 film adaption1 of Hitchhikers Guide to the Galaxy. It was based off a radio series, and has been adapted into various other media, including books, video games, television series and even stage musicals.

This scene depicts Ford first arriving on Earth. Arthur saves him, which leads to them becoming friends. He later explains that having just arrived on the planet, he mistook cars to be the dominant life form and was trying to introduce himself. Ford rescues him from Earth as a means to return the favour. This scene is currently available on YouTube, at this link.

The scene you likely remember, here, is where Arthur is being shown the new Earth. At a certain point, our hero jets passed a set of rising mountains, as the architect (played by Bill Nighy) exclaims "Voila! The Himalayas!".

All in all, it was fairly easy to identify this movie because it is such a well known title in SciFi culture. However, given your limited recollection, I thought it might be useful to include a few other titbits to help jog your memory.

Deep Thought and the Ultimate Answer

First of all, there is the computer that was built to work out the ultimate answer. Nobody bothered to determine what the ultimate question was, so when it returned with "42", it left everyone a little confused. This put in motion the events that lead to the creation of Earth. 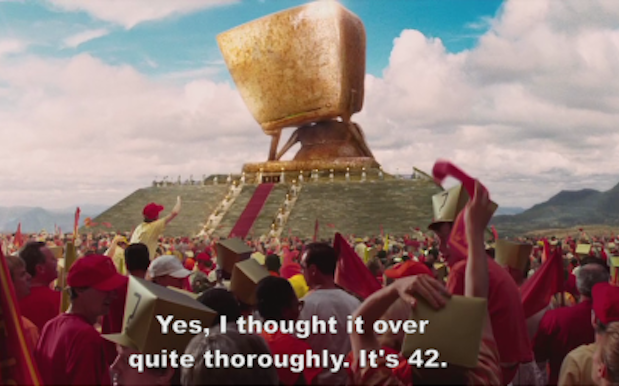 Marvin is a depressed robot who accompanies Arthur and his friends throughout the movie. Voiced by Alan Rickman, he is (in my opinion) the most iconic character of the movie. At one point, he saves the day by firing a "point of view" gun at an army of attacking aliens. Suddenly overwhelmed with depression, themselves, the aliens slump down in defeat.

The Actual Hitchhikers Guide to the Galaxy

Throughout the movie, scenes are broken up with actual animated excerpts narrated by Stephen Fry, that provide nonsensical humour and background information by way of the aformentioned Hitchhikers Guide to the Galaxy.

It's "The Hitchhiker's Guide to the Galaxy." It's a very well-known movie and book series.

If this is the movie you are looking for, it is also the answer to this other question and therefore a duplicate.

-3
In which movie was the "Ultimate Question" mentioned for the first time?

17
Pre-80s movie with an alien monster who looks like a rock
16
Early 90s sci-fi movie very similar to Star Wars with lightsabers and laser guns
4
Looking for a late 70s early 80s movie about humans being replaced by robots
5
Seeking alien invasion movie
6
80s/90s movie: teenagers go inside a crashed asteroid/craft, destroy alien eggs except one, alien parent goes on a rampage looking for its offspring
14
Looking for a 70s movie with a generation ship that had farming modules
10
Old BW sci-fi movie pumpkin-headed aliens with eyes on the back of their hands