What is the basis for a parsec in the Star Wars Universe?

From Wikipedia Article on Parsec:

The parsec (symbol: pc) is a unit of length used to measure the large distances to astronomical objects outside the Solar System. A parsec is obtained by the use of parallax and trigonometry, and is defined as the distance at which one astronomical unit subtends an angle of one arcsecond, i.e. 1/3600th of a degree.

From Wikipedia Article on Astronomical Unit:

The astronomical unit (symbol: au, ua, or AU) is a unit of length, roughly the distance from Earth to the Sun and equal to about 150 million kilometres (93 million miles). However, that distance varies as Earth orbits the Sun, from a maximum (aphelion) to a minimum (perihelion) and back again once a year. Originally conceived as the average of Earth's aphelion and perihelion, since 2012 it has been defined as exactly 1.495978707×1011 m. The astronomical unit is used primarily for measuring distances within the Solar System or around other stars. It is also a fundamental component in the definition of another unit of astronomical length, the parsec.

So, as Star Wars happens in a galaxy far far away, why are they using the average distance between Earth and the Sun as a distance of measure and how do they know it?

They also use hours to measure time, which are just as Earth-centric. But remember, they don’t actually speak English in a galaxy far far away. Every word that is spoken on screen has been translated from the original language, so presumably the units have been translated into our units as well.

Parsecs, along with most other measurements of space and time in Star Wars most likely derive from Coruscant, the cradle of human civilisation and earliest explorers of the Galaxy. 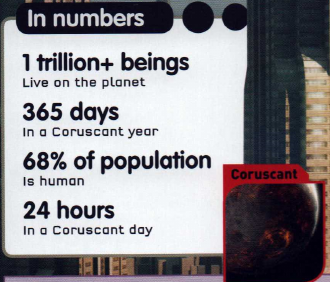 Star Wars: Absolutely Everything You Need to Know, Updated and Expanded

That being the case, and given that we know that Coruscant's rotational period is 24 hours (giving us the concept of seconds of arc), one PARallex SECond of arc would be a simple matter of calculation and would be similar to an Earth parsec, albeit not identical, probably about 30% larger.

Obviously this presents a canon discontinuity, but not a large one, and easily explained by a writing error in the Complete Locations book. If we assume they meant 155 million kilometers (instead of miles), this distances would be only a few percent difference from the distance from the Earth to the Sun and would give us a parallax calculation that was almost identical.

In the Legends continuity, Coruscant's year (and by extension a standard year) is 368 24-hour days long, not 365. Star Wars: The Essential Atlas (2009) mentions this, as well as confirming that Star Wars parsecs are 3.26 light-years long, the same as Earth parsecs.

I noticed that this seemed like a discrepancy, since a light-year with a longer year would be a different length than real-world light years (even assuming Coruscant otherwise had the same orbit as Earth for the purposes of parallax), so I emailed Daniel Wallace, the author of The Essential Atlas, in order to ask which values were being used. I asked whether A) in-universe light-years were longer than ours, B) Coruscant years were the same length as ours (and just had shorter days), or C) in-universe light-years and parsecs were the same length as ours and just arbitrarily defined.

Here is an excerpt from his reply, from 2009 (emphasis added):

[...] I think our approach to units of timekeeping is to try to make them as equivalent to "real world" units of timekeeping as possible. This is both for the sake of our sanity and for the sake of making the universe something readers can relate to. So, while it's true that West End Games introduced a ten-month calendar, I personally will never use it, and Lucasfilm basically uses a 12-month calendar anyway.

Therefore, I'd be happiest if it turned out that Coruscant had a 24-hour rotation cycle and a 365-day orbital period, and an AU that is 149,597,870,691 meters. Turns out it doesn't, but we're still going to use real world references to avoid the need to make conversion calculations every time we provide a specific bit of data. If you think about it, the meter is one ten-millionth of the distance from Earth's equator to the North Pole, so technically the meter, kilometer, etc. don't have a basis in the GFFA but we keep using them anyway.

You really hit on the problem when you reference the Decoded episode below. The writers of Decoded (and 99% of all novels, comics, and spinoff products) are going to use "real" figures because that's what they know -- therefore the sane solution is to make all in-universe figures from the GFFA the same as ours.

From an in-universe perspective, I guess this makes it closest to your third solution, namely that parsecs are either arbitrary or based on some other planet's measurements. This is weird, I don't deny it -- but I think it does less damage to the SW universe than the alternative.

So, it looks like for the purposes of the authors of the Expanded Universe, the answer was closest to C): parsecs are the same as ours but not based on similar measurements. Now that an in-universe year is canonically 365 days, hopefully this is less of a headache for the authors.

*based on correspondence probably not authorized by Lucasfilm