How did Rey repair the Skywalker lightsaber?

In The Last Jedi Rey and Kylo have a tug of war over the old Skywalker lightsaber, was Anakin's, then Luke's (who lost it), then Maz gave it Rey etc.

However, in The Rise of Skywalker the lightsaber is suddenly rebuilt and working again with no explanation. As far as I know building lightsaber's is a tough thing to do and one of the final tests for a youngling. And the lightsaber split the kyber crystal in two so it wasn't as simple to just glue the two sides back together again.

How did Rey fix the broken Skywalker lightsaber?

I've spent a bit of time looking around and found the followng. In The Rise of Skywalker: The Visual Dictionary the lightsaber has several annotations on it reading: 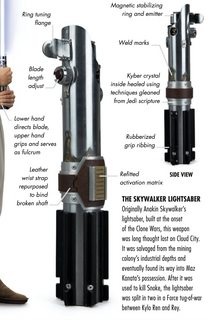 Of course fixing the casing was the easy bit for Rey from being a scavenger, she just welded it back together and used some leather strapping to help bind the two halves together. However, it also seems from the Jedi scripture she took from Ahch-To was some information on healing the Kyber crystal.

We get a bit more information on this later on in The Visual Dictionary where is states the following along with an image of Rey's little workstation on Ajan Kloss:

Rey is fascinated by the arcane healing techniques described in the Chronicles of Brus-bu, and uses the underpinnings of such teachings to heal the broken kyber crystal in her lightsaber.

This is of note because it would seem that she actually taught herself how to do it somewhat from some related teachings but not teachings on how to do it specifically. We also see some "Lightsaber diagrams" in one of the books so it's likely there was a bit more information on how lightsabers worked in them even if not down to the detail of bonding a kyber crystal. 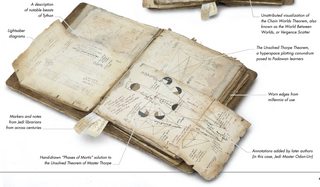 Lastly, I think it is worth noting that in The Rise of Skywalker we learn that Leia underwent Jedi training and even constructed her own lightsaber that Rey uses later on. Whilst we never see Leia teaching Rey on constructing a lightsaber, that I know of, she was training her. It's possible that as part of this training Leia also helped Rey with repairing the old Skywalker lightsaber.

Not the answer you're looking for? Browse other questions tagged star-wars the-last-jedi the-rise-of-skywalker or ask your own question.

29
How can Kylo Ren recognize this item?
5
How effectively can the vented energy from Kylo Ren's lightsaber serve as a crossguard?
8
Are actual lightsaber crossguards effective?
2
Could Luke's lightsaber call to Finn instead of Rey?
4
How does Maz know this?
2
Where was Rey running to on Takodana?
36
Who turned on the lightsaber?
16
Which predictions of The Rise of Skywalker: Darths & Droids Bingo were correct?
16
Why does Kylo Ren's lightsaber use a cracked kyber crystal?
10
How did Luke get his lightsaber back from Raynar Thul?