What is the earliest instance of "Dark Elves" in modern Fantasy?

In many different modern fantasy settings, Dark Elves as a race share some common traits, and can be considered to be an archetype of sorts from which each setting adapt some features to better fit in the specific fictional world.

Just as examples of some of these traits, which can even not be present in a single particular setting, they:

and so on. Keep in mind that this list is only a sample. Some examples are the Drow from Dungeons & Dragons, the Dunmer from The Elder Scrolls, the Dark Elves from the Age of Wonders video game series, and so on.

Given these premises, where can be traced the origin of this racial archetype? Which work contains the first example of modern fantasy Dark Elves if considered under these terms?

The origin of the dark elf / light elf trope can be traced back as far as the 13th century, where Dökkálfar (dark elves)and Ljósálfar (light elves) are mentioned in the Prose (or Young) Edda by Snorri Sturluson. Here, the Ljósálfar are described as "fairer than the sun to look at", while the Dökkálfar are "blacker than pitch". It is unclear whether the distinction between the two types of elves originated with Snorri (and hence can be considered fantasy), or if he was merely recounting an earlier mythological concept. Snorri also mentions svartálfar ('black elves'), but it is believed that refers to subterranean dwarves.

In modern fantasy, the trope dates back at least as far as 1980, with Elizabeth Boyer's novelThe Sword and the Satchel, the first in her World of the Alfar series, which features conflicts between light and dark elves.

It can argued that dark elves appeared before in Advanced Dungeons and Dragons, though the 1977 Monster Manual states that "The 'Black Elves', or drow, are only legend". However, the drow of later D&D books have very much shaped the modern version of dark elves, especially through the popular hero Drizzt Do'Urden. It is thus probably fair to say that modern dark elves mainly are a product of D&D.

The first example of the "dark elves" as a distinct dark-skinned, subterranean, evil sub-race of elves may actually be their appearance in Advanced Dungeons & Dragons. Prior to that, "dark elf" was largely just used as a synonym for evil creatures characteristic of Nordic/Germanic folklore; there was no particular distinction between the Döckálfar (literally "dark elves") and evil Dvergar (dwarves). 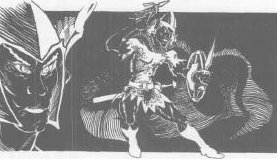 The AD&D dark elves (or "drow"—the two term were completely synonymous in the first AD&D modules in which they appeared) were originally mentioned by Gary Gygax in the Monster Manual (the first published Advanced Dungeons & Dragons book) in 1977. However, they were only alluded to as one of the minor races of elves (about which little was known) and full statistics were not given for them. A complete description of the dark elves as antagonists had to wait until module G3 Hall of the Fire Giant King in 1978. Their culture was further fleshed out in the subsequent D-series modules, culminating in Vault of the Drow (1978), which depicts their underground homeland, with feuding merchant clans, noble houses, and religious orders. 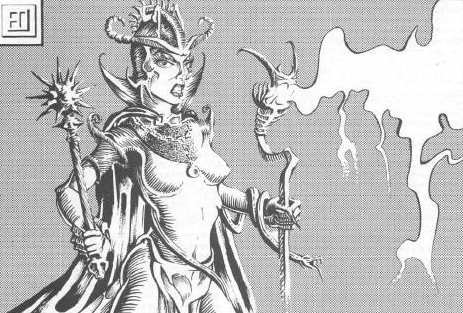 The images of the drow from these early sources can be found at this site.

Some of the characteristic dark elf features that are mentioned in the question—definitely the close clan associations, and probably the very pale hair—are original to Gygax's drow. Many later examples of dark elves were inspired by the AD&D versions to greater or lesser extents. For example, the Moredhel elf race in Feist's Riftwar saga were explicitly inspired by the drow from the game.

As reported by some users in the comments of this question, even if in Tolkien's Legendarium there is not a whole race of typical fantasy "Dark Elves", there are some single individual characters with particular traits, and some places, that could have served as inspirations for the later archetype as popularized in example by the AD&D's Drow.

AD&D's Drow race also draws heavily on Michael Moorcock's Elric of Melniboné series. Elric, along with some of the other characters from the Melnibonean mythos, were featured in the original edition of the Deities & Demigods rulebook.

One could argue that Tolkien's Orcs were the first Dark Elves, given that they used to be elves, and all other traits apply (except maybe for the clans).

Not the answer you're looking for? Browse other questions tagged history-of elves fantasy-genre races or ask your own question.

15
What is the first appearance of Elves in fantasy?

13
A good account of the development of the modern fantasy genre?
1
Multiple implementations - Relations among elves
2
Is there a well-established iconic amphibious fantasy race?
124
When and why did orcs go green?
35
Is racial interbreeding possible in Tamriel?
2
What was the inspiration for the diminishing of the elves, and separation of their realm from the world?