How did Underdog get his powers in the 1960s cartoon?

The 2007 Underdog film was amusing, but not the most logical or plausible superhero [parody] movie. In it, a normal canine is granted various Superman-like powers after being doused in various, unspecified serums and vials of diverse animal DNA. It brought to light the question:

How did Underdog in the original series get his powers? 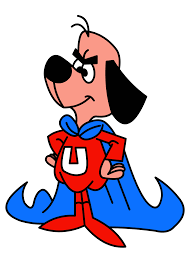 In almost every episode, the hero Underdog would be at full, Mighty-Mouse comparable power levels before his strength began to fade and he'd need to "recharge" with an Underdog Super Energy pill, which he kept in a ring. Nothing further was ever explained. Not where he got the pills from... Not why his powers would wear down... Not how he got them originally.

Note: This was a 1960s "spoof" show that purposefully didn't hold too close to logic; anthropomorphic animals coincided with humans, some folks had green skin, and clouds from another planet wanted Earth's silver to make linings for their coats.

I checked the first episode, and no details were provided there either. In the movie, it was Dr. Simon Bar Sinister who accidentally gave the regular dog his powers, but he was a mere supervillian in the cartoon.

Is there any real back story or origin for the character?

In the book "How Underdog Was Born" according to the creators, it was explained that Junior (his name before he had super powers) had been tracking an evil dentist who had killed his father (Lewis N Clark). He followed the trail to a mine. It was a trap. The evil dentist blew up the opening of the mine and began filling the mine with laughing gas. At that exact moment lightning hit the mine and it exploded. The result was that it instantly turned the coal to diamonds and also gave Junior super powers.

Molly Barker, his mother made Junior promise to stay humble and help the underdogs in life, and so that's also how he got his name.

Not the answer you're looking for? Browse other questions tagged underdog or ask your own question.