What exactly did the Death Eaters Jr. do for Snape?

In several answers and comments (here, here) there seems to be an implication that James' bullying may have been the cause - or at least, a factor - of him joining the future Death Eater clique in Slytherin Hogwarts.

JKR seems to hint at that:

like many insecure, vulnerable people (like Wormtail) he craved membership of something big and powerful, something impressive.

Slytherincess is a lot more explicit:

He was bullied and the idea of a brethren (the Death Eaters) was appealing to him.

I was all ready to buy into that theory of Slytherincess's, when it dawned on me: Just how did that help him? When James was bullying him, none of his Death Eater buddies seemed to have been around to stick up for him.

So the question is: Is there any canon support that joining that clique helped Severus Snape materially as far as being bullied?

Not just in a theoretical psychological "I belong to a powerful group" way (ala rooting for a sports team despite being a couch potato), but in an actual "I will punch out Malfoy's mouth for insulting my friends" Ron/Hermione/Harry way.

I think there is canon support for the administration of actual, physical protection by one's fellow Death Eaters or the groups on their way to becoming Death Eaters post-Hogwarts.

‘As [Tom Riddle] moved up the school, he gathered about him a group of dedicated friends; I call them that, for want of a better term, although as I have already indicated, Riddle undoubtedly felt no affection for any of them. This group had a kind of dark glamour within the castle. They were a motley collection; a mixture of the weak seeking protection, the ambitious seeking some shared glory, and the thuggish, gravitating towards a leader who could show them more refined forms of cruelty. In other words, they were the forerunners of the Death Eaters, and indeed some of them became the first Death Eaters after leaving Hogwarts.’

This is not directly written about Snape, but Dumbledore acknowledges that affiliating one's self with the Death Eaters seemed to carry with it some insular protection. No, we didn't see anyone come to Snape's aid (except for Lily) when James was bullying him in Snape's Worst Memory in Order of the Phoenix; however, Snape cast Sectumsempra¹ on James in retaliation and did manage to cut James's face open. He managed to get a shot in. Even the tightest of groups cannot be together 24-7, especially with each member having a different schedule, etc. There would have been times that Snape was alone and vulnerable to being targeted by the Marauders. Had his fellow Death Eaters been there, though, I believe they would have stepped up to the challenge, if for no reason other than they derived pleasure from cruelty.

Three of the Death Eaters swerved and avoided it, but the fourth was not so lucky: he vanished from view and then dropped like a boulder from behind it, his broomstick broken into pieces. One of his fellows slowed up to save him, but they and the airborne wall were swallowed by darkness as Hagrid leaned low over the handlebars and sped up.

This time a great net burst from the bike’s exhaust, but the Death Eaters were ready for it. Not only did they swerve to avoid it, but the companion who had slowed to save their unconscious friend had caught up: he bloomed suddenly out of the darkness and now three of them were pursuing the motorbike, all shooting curses after it.

Canon examples of Death Eaters assisting each other when one was in physical danger.

I'm not so sure that James Potter was as big an impetus to Snape joining the Death Eaters as he's made out to be. Snape was pretty obsessed with Dark Magic; Sirius described Snape as arriving at Hogwarts at eleven knowing more curses than most seventh years. That's some serious interest in and dedication to the Dark Arts. Canon suggests there were multiple reasons why Snape chose the Death Eaters.

¹To clarify, Snape cast a spell that cut James's face open. It is not implicitly stated that it's Sectumsempra; however, it is strongly implied. In Deathly Hallows (chapter 5, The Fallen Warrior), Lupin notes to Harry that Sectumsempra was always a "specialty" of Snape's. 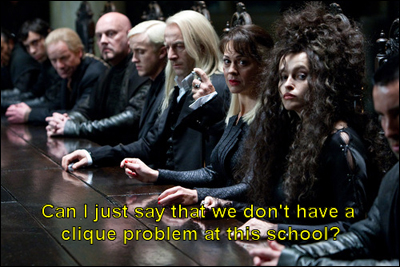 I always got the vibe that James and Sirius specifically attacked Snape because he was alone. I don't agree that Snape was far greater of a wizard than James, but he did tell Harry at the end of Half-Blood Prince that James always attacked him when he had backup and Snape didn't:

“Coward, did you call me, Potter?” shouted Snape. “Your father would never attack me unless it was four on one, what would you call him, I wonder?”~Harry Potter and the Half Blood Prince - 28. Flight of the Prince

Though he wouldn't admit it, James probably knew that Snape could be a problem if they dueled one-on-one (I don't think it would be an outright curb-stomp either way though).

From a meta perspective though the chapter "Snape's Worst Enemy" wouldn't have been as effective had we seen five more Slytherins rushing in casting curses at James and Sirius. We needed to see Snape as a victim and James and Sirius as the aggressors.

Snape's gang probably did offer him a bit of backup on occasion, and maybe even had their own conflict with the Maurauders. Just because we never see it doesn't mean it never happened.

23
Why did Snape become a Death Eater to begin with?
11
Was Snape romantically attracted to Mulciber?
19
Why would Severus Snape hang out with future Death Eaters?