I was looking over the Wikipedia list of time travel stories and realized one I had read in the early 1980s was not listed.

It was a short novel, perhaps 100 to 150 pages in paperback. I recall it being a well-known author of the 1970s, on par with (for instance) Pohl (but not him, I checked). The cover I recall clearly, it showed a teardrop-shaped spacecraft with an eye-like porthole floating just above a desert-like ground, and the atmosphere (and thus most of the background) was a sick yellow color like the air was poisoned.

The plot involves the protagonist coming across a time-travel system being experimented with by a group of scientists. Using the device, they discover an alien spacecraft that had been abandoned there millennia ago. I believe they go into the past to retrieve it, as opposed to digging it up in the present. Adventures follow, including traveling to another planet where the equally-dead race's automated spaceport attacks them by heat and they escape just in time. Then they fly home, return to the present, the end.

If that sounds a bit dumb, even at that age I wasn't terribly impressed with the story. But I do seem to recall it being someone well known... hmmm, well-known author but dumb plot... now I'm thinking Piers Anthony. Nope, not him either.

That is almost certainly Andre Norton's Galactic Derelict which matches your description point for point.

Here is probably the cover you remember: 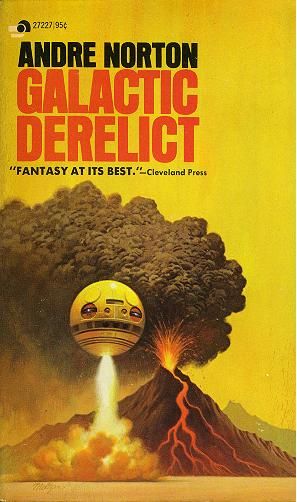 Here's an image search with a whole set of covers. And here's the Wikipedia page on the book.

Something in your description is reminiscent of a story by Gregory Kern (a pseudonym of E.C. Tubb), titled Galaxy of the Lost, published in 1973: this short novel includes an automated spaceport of a dead race that has been abandoned but no time travel that I remember, just (perhaps) another dimension.

The cover of a later edition also might fit your memories to some extent: 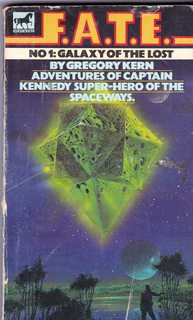 10
How did Archer time-travel into his own body?
13
Looking for a time travel fantasy/scifi novel from the late 80s/Early 90s
5
Science Fiction novel with women in charge
13
Identify a book series, where order fights against chaos and they travel back in time
10
Time Travel Book featuring dinosaurs, cave people, and children
11
A novel involving philosophy and hyperspace, ca. pre-1990
13
Short Story involving time travel, origin of man, and an ancient enemy
29
Time travel to the crucifixion of Jesus and changing the past
9
Time Travel book from 70's where people were sent from 150 years in the future to our present time