What color is Rey's new lightsaber?

In The Rise of Skywalker, we see Rey has a new lightsaber at the end of the film: 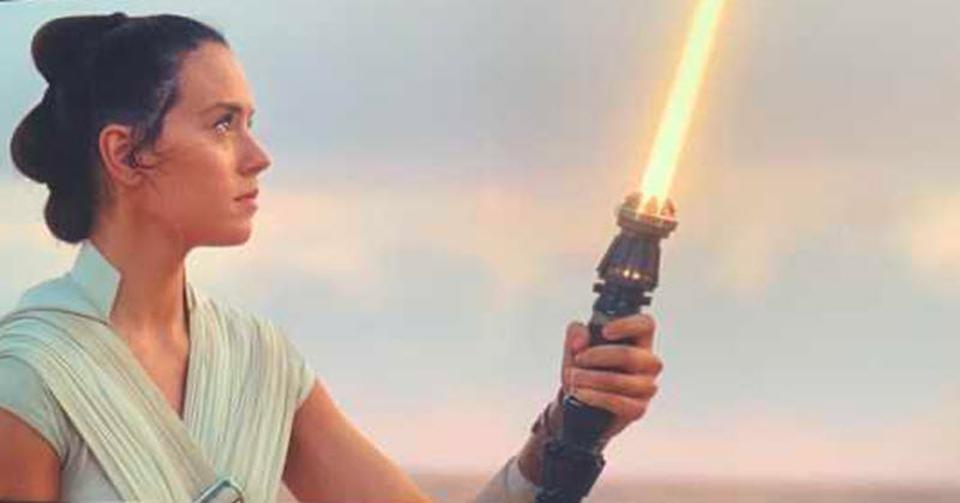 Based on this image (and my memory from seeing the film), I would've said this lightsaber's blade was orange or maybe gold. However, I've seen people refer to it as being yellow.

Is there anything from Lucasfilm or the filmmakers of The Rise of Skywalker that says what the color of her lightsaber is?

It is "golden yellow" according to Industrial Light & Magic's (ILM) visual effects supervisor, Patrick Tubach and the rest of the team there.

Is there a specific name to Rey's lightsaber color? We're going with 'yellow optimism.'

"That specific color yellow, if you go too pale — this is getting really in the weeds here — if you go too pale and you make it too light, it's going to look white a lot of times," Industrial Light & Magic (ILM) visual effects supervisor Patrick Tubach said of one factor that helped them land on that precise color. "Colors on film, sometimes they bleed away depending on the exposure and the quality of the light in the scene."

"Making it that more golden yellow gives you that optimistic feeling, and it also allows you to make it supersaturated and still feel like it's in the 'Star Wars' universe," he added.

When asked if they had a specific name for the color, optimism was a word that came up frequently to describe the tone they were going for with the look of Rey's lightsaber.

"We definitely went for things like golden and sun and optimism," said Tubach.

"I think the optimism carried that choice," added Guyett.

Insider, The 'Star Wars: The Rise of Skywalker' visual effects team explain Rey's new lightsaber and the small detail you may have missed in it

Of note is that apparently the kyber crystal was already yellow when it came to Rey:

Rey's lightsaber does include a yellow kyber crystal

"Yeah, it's supposed to be a yellow crystal," said Tubach.

Insider, The 'Star Wars: The Rise of Skywalker' visual effects team explain Rey's new lightsaber and the small detail you may have missed in it

The film's official novelisation describes it as "white-gold"

Her lightsaber glowed white-gold, and she gazed at it a long moment.

The film's junior novelisation, rather less poetically, refers to it as "yellow".

The yellow-bladed lightsaber she had built would honor their legacy.

Not the answer you're looking for? Browse other questions tagged star-wars lightsaber the-rise-of-skywalker rey or ask your own question.

14
What is the source of Rey's lightsaber?