What happens to the air in the area, when things are transported or replicated?

A fundamental law of physics is, in short, that two things cannot exist in the same space at the same time. This is easily demonstrated by dropping a relatively large mass, such as pasta noodles, into a container of water, such as a pot. The water level will rise as it "makes room" for the pasta, and will overflow if you've put in too much of either. Conversely, if you were to scoop all of the noodles out (presuming you had a way to scoop just the noodles, without taking along any water at all) you would see the water sink down to its original level (or lower, if it had overflown earlier).

Taking this into consideration, I see a problem with transporter technology which I'm not sure I've ever seen addressed: What happens to the air surrounding a transport subject's origin point, or occupying the destination?

The transporter must have some means of compensating for the displacement, otherwise each transport should in theory be accompanied by a loud pop at each end - at the origin when the air collapses to fill a vacuum left behind, and at the destination when a relatively large volume of air is forced away to make room for the subject. This effect should be even more pronounced, and perhaps even hazardous, in closed environments such as spacecraft where the air has really no place to go.

One option would be to have the transporter exchange the air (or other matter, such as dust or raindrops) at the destination for the matter of the subject, as it is being transported. However, this is not seen as we would often notice small portions of dust storms or downpours getting dropped onto the transporter pad when people are transported into adverse weather conditions. Imagine having that cleanup as part of the Transporter Chief's job duties.

Another option would be to process the matter from the destination through the replicator, so that it is congruous with the same volume of air at the origin. This would be a fairly complex operation though, and could result in a lag too long to be acceptable by the laws of physics.

Come to think of it, this same (or a similar) issue should affect replicator and holodeck technology as well. Has any of this ever been addressed canonically, either in a Star Trek episode or in technical manuals?

First, transports take 2-3 seconds to complete dematerialization, and a few more for materialization. We wouldn't see the crew fade in/out during the glowy parts otherwise. 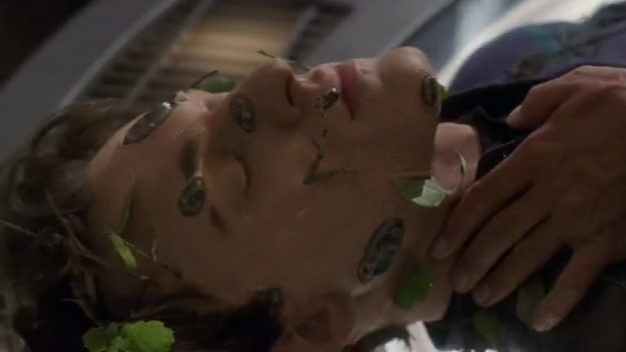 So, explanation based on these two data points?

The same should hold for replicators - when shown onscreen, they're shown having a materialization time period, just like transporter rematerialization.

Holodecks I'm uncertain about, but there's no reason the inside of a hologram has to be filled. They could be paper-thin - there's next to no displacement in that case!

Air particles would be moved out of the way as the new body is being constructed.

I spent a long time, and I do mean a LONG time thinking this over and reviewing information in the Star Trek: The Next Generation Writers' Technical Manual, Fourth Season Edition. And I keep coming back to the points I've brought up in another question. While that provides support, it's not a full answer. I'm going to include some of that answer here as explanation.

I'm going to my source for this, one I've cited here before, the Star Trek: The Next Generation Writers' Technical Manual, Fourth Season Edition. This was sent to me directly, in a pitch package by the ST:TNG Script Supervisor Lolita Fatjo, when I was invited in to pitch story ideas to the producers. This is one of the Writers' Guides sent to those who would be writing for the show and, in some ways, goes beyond canon because it defines canon. In other words, it tells the writers what they can and cannot do on screen.

On page 28, under The Transporter - Once and for All:

... The stream of molecules read by the pads is sent to the Pattern Buffer, a large cylindrical tank surrounded by superconducting electromagnetic coils. It is here that the object to be transported is stored momentarily before actual beaming away from the ship (or even within the ship). It is the Pattern Buffer and its associated subsystems that have been improved the most in the last half-century. While the actual molecules of an object are held in a spinning magnetic suspension (eight minutes before degradation), the construction sequence of the object can be read, recorded in computer memory (in some cases), and reproduced. There are limits to the complexity of the object, however, and this is where the potential "miracle" machine still eludes.

The reason for this is that routine transport involves handling the incredibly vast amount of information required to "disassemble" and :reassemble" a human being or other life form. To transport something, the system must scan, process, and transmit this pattern information. This is analogous to a television, which serves as a conduit to the vast amount of visual information in a normal television transmission.

(Note: This was written when all TV was still analog and DVDs were not yet out -- and remember that we could transmit TV signals before we could actually tape and keep them.)

Continuing to quote from the same passage:

Storing that information, however, is another matter. In our analogy, it would be like comparing a television (which is incapable of storing an image) to a videocassette recorder, which can store a relatively low-resolution recording of a television program. In order to store the patterns for a human being, one would have to record not only all the atomic and molecular configurations, but all the quantum and energy states of all the electron shells, and the brownian motions of every sub-atomic partical of every atom. While we cannot store all of this incredibly complex information, we can use it as it is being handled in real time.

So the information and matter taken from the original and needed to reconstruct the duplicate are taken from the original as it is dismantled, then place in the "stream." (I consider that a loose term, since all of it, matter and energy, goes through the pattern buffers and through an actual stream confined by the annular confinement beam, or ABM.) We can skip all the steps and say the stream goes from the original, through a bunch of stuff, to the new version, wherever that is. And once there, it is assembled, particle by particle, in the new location.

Now, we know what even solid matter is mostly empty space. So it wouldn't be hard, each time a particle is put in place, to use some kind of force to repel any in the way. While it's never stated this is done, this process takes an actual particle and places it in the new location, then places another molecule, and another. Since the molecules are not going through some kind of energy/matter conversion or anything else, but they are just molecules, if something were done with the matter in the area, we'd see some kind of explosion form the energy. (Either particles would be split, merged, or otherwise messed with at a sub-molecular or sub-atomic level.)

So the air molecules would essentially have to be moved aside for construction of the solid (or liquid) form out of molecules flowing out of the ACB.

This would also explain why someone could partially materialize in a bulkhead or something. Even in a rock, there's still space between molecules. I don't remember if we've seen a person or object that materialized in another object, but I seem to recall, it looked like the two parts were just melded together, with one coming out of the other.

If anything were done, such as "destroying" the particles that were there, we'd see indications of either explosions or significant radiation, which would make using the transporter too many times dangerous.

Actually this is problematic on a few levels. If the teleported object is reconstructed from atoms at the destination point, then there would be a massive shockwave and heating from an equal density volume of air. And it wouldn't work in a vacuum.

If the transporter uses another method of reconstructing atoms eg from 'quantum foam' then it needs to be stabilized by cooling it down massively eg. Optic cooling/trapping which seems reasonable but the atoms need to be created from energy - massive amounts. Atomic level explosions. Or supplied e.g. by an atom maser but then it's line of sight only. But interesting possibility. This style of transporter is also covered in Accelerando.

If the transportation is through a wormhole like method, then it is 2 way so you get dual contamination both ways through the throat of the wormhole and what happens to inertia? Beaming from the equator to a pole could send you flying off at a massive speed.

My guess is that the holographic reconstruction of atoms in the arrival space displaces or destroys the equivalent volume of matter.

If we ignored the above and did a thought experiment of this: For 7 people, 2m tall, 1m diameter cylinder each, packed into a sphere you are looking at displacing a volume of approx. 14m^3 over a surface area of 28m^2 = 0.5m / re-integration time in sec.

I am simplifying here by assuming all the air volume is at the edge of the sphere volume. With a centre point expanding out - your wind strength over 1s varies from 0.5-3 m/s which is a gentle-fresh breeze (branches sway).

Note: from iphone at 5am, might be a couple of typos here.

Perhaps the transporter or replicator pads create a vacuum while the transport is in progress and the matter stream completes the transports from the center of the mass to the edges, causing the air to move as it's rematerializing.

Not the answer you're looking for? Browse other questions tagged star-trek holodeck star-trek-transporter replicator or ask your own question.

4
How do Star Trek transporters stop you from being merged with stuff?
0
Transporter Displacement
0
Vacuum or shock wave cased by beaming
70
Has there ever been an instance in Star Trek where someone beamed into a solid object?
53
In Star Trek, does the original die in teleportation?
9
Transporting of whales in The Voyage Home: what happened to the air in the tank?

12
How are transporters able to transport energy?
31
What is the difference between the transporter and the replicator?
12
How Can Replicators Work Without Mass/Energy Conversion?
19
Has anyone been beamed into the future or past in Star Trek?
8
Does transporting (beaming out) leave your troops vulnerable to enemy attacks?
6
Can the Star Trek transporter separate two people who were in close proximity?
19
Could Data be replicated?
6
Why can't Trekkers use their transporter buffers to keep back-up copies of people transported?