What's the relationship between X-Wing pilot Porkins' name and appearance?

So, not be insensitive, but in A New Hope there's an (aptly named?) X-Wing pilot named Porkins. 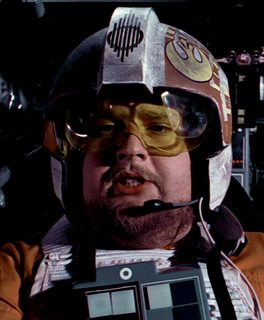 What information is available on how this all played out?

All signs point to the character of Porkins being created before William "Bill" Hootkins was cast for the role, then his being assigned the role once he'd agreed to play a pilot.

William "Bill" Hootkins was originally offered the role of Jabba the Hutt but declined it in favour of another role that he had auditioned for (that of Mr. Fatty in Valentino), returning to the set of Star Wars and filming his scenes between June 29th and July 16th, 1976.

According to The Making of Star Wars, in late April 1976 it became apparent to Lucas that they were short of X-wing pilots and calls went out to actors who'd successfully auditioned but declined roles, including Hootkins. When he arrived on set he was bemused to learn that his character's name was Porkins, initially thinking that he was going to be given a pig-like makeover.

The character of Porkins appears in the Fourth Draft script (dated March 1976), written before he had agreed to play an X-wing pilot. Lucas and his casters would undoubtedly have been aware of Bill Hootkins' size and stature, making him an obvious choice for Porkins, described in the script as having the nickname "Blue Pig".

Based on the timelines, it's clear that the role of "Porkins" wasn't specifically written for Hootkins, nor was Hootkins specifically cast for the role of Porkins, as he was simply one of several actors called in to do fill-in shots as pilots, however, once he'd agreed to play a role, he was the obvious choice for the overweight pilot envisioned by Lucas in his script.

10
Who is the Rebel pilot who got stranded during the Battle of Yavin and had his place taken by Luke?
21
Out of universe, what's the origin of the name "The Force"?
33
What's the relationship between the Resistance and the Republic?
10
What's different about the new X-Wing fighters?
6
Why did an X-wing pilot scream something that sounded like "Yes!" during the Battle of Yavin?
7
Is the relationship between Dathomiri and Rancors still canon?
34
What's the relationship among the many uses of the name "Galen" in sci-fi?
19
Was Wicket W. Warrick named after Warwick Davis?
3
Tandy CoCo 2 game that replicated the Death Star trench run, maybe also landspeeders on the Endor moon?