I took a science fiction class in high school. Upstate New York. I remember reading a story about an astronaut landing on a planet. When he crash-landed he thought it was uninhabited. Then his eyes adjusted and he could see that the grass was alive and moving. The astronaut had a hard time seeing the live grass because his human eyes could perceive the life on this foreign planet.

Here are some of the interior illustrations: 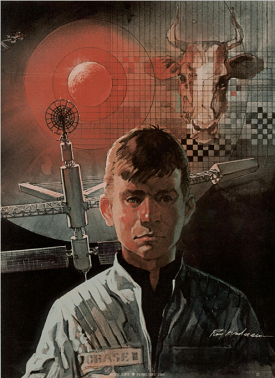 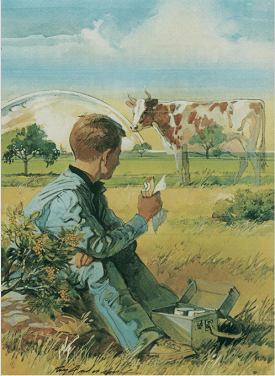 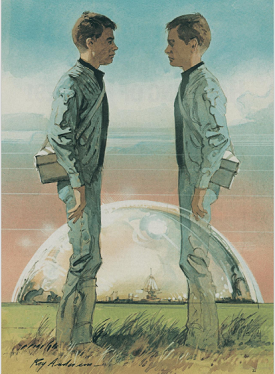 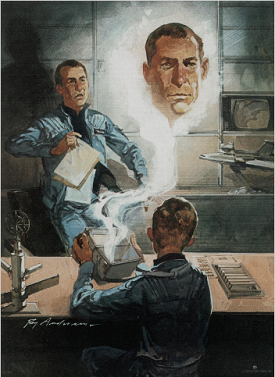 It was published in Boys' Life magazine in 1985. It's quite possible that a high school class on science fiction in Upstate New York could have read it.

It was newly published in 1985, so not old. But Asimov was an older generation of writer. The bulk of his science fiction was written in the 1940s and 1950s. So perhaps the story just seemed old because it was Asimov.

I remember reading a story about an astronaut landing on a planet. When he crash landed he thought it was uninhabited. Then his eyes adjusted and he could see that the grass was alive and moving.

Hallucination is about a Sam, a boy who has been sent away from Earth to the Energy Planet, where he will undergo his basic training before being sent to serve in space. So he didn't crash-land. But the planet is thought to be uninhabited, except for lots of grass and some tiny insects. Boys' Life magazine summarizes the beginning of the story like this:

Sam Chase, 15, has arrived on Energy Planet. As part of his career training, he is to help in a project devoted to obtaining useful information from a nearby neutron star.

Sam is more interested, however, in the human brain, and so he is particularly interested when he hears that people sometimes experience hallucinations when they go outside the Dome in which they live and work. In addition, the Commander of the project is seriously depressed.

Sam gets permission to venture outside the Dome, where the planet's native life-forms seem to consist solely of rich vegetation and tiny insect-like animals. It seems unnatural to him that there are no large animals on the planet, and at once, a misty insubstantial figure of a cow appears before him. It is wrong in detail, and it alters to a human figure, closely resembling Sam himself.

At this point, let me quote directly from the story:

As far as looks were concerned, the planet might have been Earth, some part of Earth anyway, some place where there were a few trees and low bushes and lots of tall grass. ... All that greenery. There ought to be animals eating it, rabbits, cows, whatever. Not just insects, innumerable insects, or whatever those little things might be, with the gentle sighing of their tiny feathery wings and the very soft crackle of their munch, munch, munchings of leaves and stalks.

What if there were a cow—a big, fat cow—doing the munch ing? And with the last mouthful of his second sandwich between his teeth, his own munching stopped.

There was a kind of smoke in the air between himself and a line of hedges. It waved, billowed, and altered: a very thin smoke. He blinked his eyes, then shook his head, but it was still there. He swallowed hastily, closed his lunch box, and slung it over his shoulder by its strap. He stood up.

He felt no fear. He was only excited—and curious.

The smoke was growing thicker, and taking on a shape. Vaguely, it looked like a cow, a smoky, insubstantial shape that he could see through. Was it a hallucination? A creation of his mind? He had just been thinking of a cow.

Hallucination or not, he was going to investigate.

With determination, he stepped toward the shape.

The smoke seemed to condense and grow darker, outlining the cow more sharply. It was as though the cow were being painted in the air.

It turns out that it's not the grass that's intelligent. It's the insects in the grass. Or rather, the whole swarm of insects is intelligent as a group. They form an intelligent group mind, capable of telepathy, which is how they communicate with Sam.

23
Short story about a secret suburban house on the moon
7
Science fiction short story collection involving space exploration
8
Anthology containing the story "Green Mold"(?) where green mold grows on everything and eventually the astronauts
17
Short story about aliens trading for hydroponics
12
Book about a man who is turned into a quadruped while searching for a colony ship on an alien world