Story or novel about elephantine aliens – NOT the Fithp!

My husband is searching for a story or novel he read years ago. An alien planet has humanoids with elephantine trunks for noses, but no other real resemblance to actual elephants, and then there are also creatures who are 4-legged and DO resemble elephants. A human belonging to an exploration team gets stranded and asks for help from one of the elephants, who is part of a rare and vital pilgrimage, but agrees. The human then learns that interrupting the pilgrimage was a huge sacrifice for the elephant, and encourages his helper to rejoin the pilgrimage. They make it to the holy site just in time – I believe there is some ridicule by the elephantine humanoids, but the elephant is permitted to enter the site: a cave or cave series. The human is also permitted to enter. Inside is foggy/steamy, and the human and his elephant companion progress through a series of chambers. When they emerge, the elephant has evolved into an elephantine humanoid; the human has remained unchanged.

Downward to the Earth by Robert Silverberg 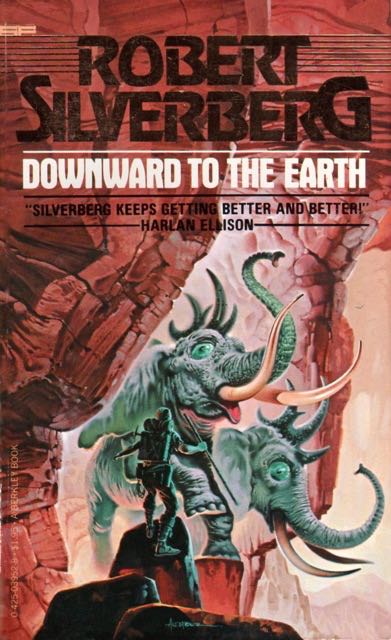 You can see the elephant-like aliens right on the covert art. The plot synopsis from Wikipedia hits on the main points in your husband's description.

There are elephant-like aliens:

Edmund Gunderson was the Terran administrator of the colony world of Belzagor, and he returns to it after it has gained independence, feeling a sense of guilt for the way he has treated its dominant species, the elephant-like Nildoror, whose animalistic appearance had kept Gunderson from taking them seriously as sentient beings.

Gunderson's greatest guilt comes from having denied rebirth to seven Nildoror to make them help him repair flood damage.

The main character takes part in the rebirth ceremony along with the aliens:

Nevertheless, Gunderson dares to subject himself to the rebirth ceremony, which brings him a new understanding of the native creatures and new powers by which he can heal Kurtz and impart his new-found knowledge to others.

I found some quotes from the end of the book, where Gunderson goes into the cavern for the rebirth ceremony. It's a cavern/cave system, full of mist, with multiple chambers just like your husband described.

A heavy blanket of fog sat close upon things now. ... He hng back, posting himself behind a convenient boulder and allowing himself wary peeps at the mouth of the cavern. ... The mist, the constant companion here, approached and clung. ... Gunderson was alone. This was his moment to peer into the cavern, but he could not bring himself to make the inspection. His lungs were choked with mist. ...

He went to the mouth of the cavern. ... Straight ahead, flanked to by rippling wings of stone that were parted like frozen curtains, lay a passageway, wide enough for Gunderson but probbably something of a trial for the bulky nildoror who had earlier come this way.

He went toward it.

The corridor was about twice a nildor's width and three times a nildor's height, rising to a peaked vault in which the fungoids dwelled. It stretched for what seemed an infinite distance into the mountain. Branching off it on both sides, Gunderson saw, were secondary chambers and passages.

16
Novel about benevolent aliens landing on Earth
4
Story ident : Novel about a man abducted to be a pet for aliens
7
Novel About Shape-Shifting Aliens
11
Novel about aliens retrieving human hybrids pre-birth
35
Short story about aliens warning humanity not to leave Earth
26
Story about encounter with hostile aliens