I couldn't find the game or the name of the game I played in the 2000s and was looking to see if anyone remember it.

It wasn't a very popular game, and I believe I played it on PC on an online website for flash games. It has similar art style as "The Dead Case" by Retshark, as it is 2D with the hand drawn lines at the background and for the characters, simplistic with thick lines and kind of looks like you drew it from paint (not an insult btw I love the game). The ghost in the game has similar colour scheme as Spooky in "Spooky's House of Jump Scares" by Lag Studios. You can move around with your controls and click on different items on the screen to interact with it.

The story starts with seeing this satan like figure kind of destroying villages and taking over, and the girls have to stand up against it and fight it. You choose between three characters: the ghost, the witch and the vampire.

The story goes on with you exploring different parts of the village, obtaining information, looking for the other two ladies and gaining powers for yourself before you go fight the creature with them.

I remember the art style distinctly as it is not very common and I really enjoyed the game. I know this game was popular enough to have a walk through since I was stuck at a level before. Hopefully someone here stumbled upon this game before, like I did, and remember the name of it, unlike me.

Thank you very much!

I've been looking for this game for a really long time, and I finally found it!

It's called Devil's Triad, and I've linked it for you :) 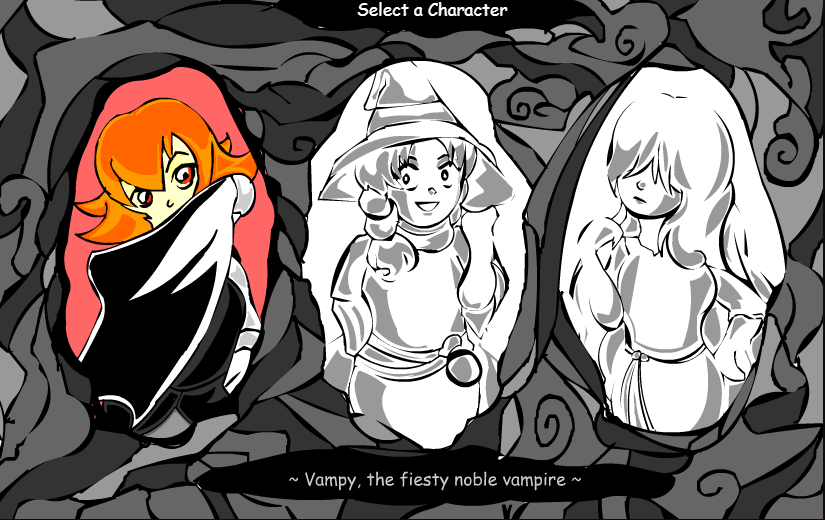 Not the answer you're looking for? Browse other questions tagged story-identification vampire ghost witches games or ask your own question.

12
Short story about an immersive video game with a fantasy dungeon crawl theme
3
Flash point-and-click game where you are a newly risen ghost
8
Fantasy book with color-coded magic with gold magic as highest and enchanted armor
7
A witch, a cat and a vampire are fighting for the survival of two worlds together with a dragon, an incubus, a human and a werewolf
7
Point and click game where there were a handful of ghosts you had to help “release”
5
90s fantasy strategy PC game - wizards, warriors and bards
4
Color Computer 2 fantasy game with maze and a selection of magic and weapons
11
Space-themed MS-DOS game with top-down perspective, crumbling bridge, and ghost-like aliens