Kindle superhero series including an army guy in powered armor, a self-aware robot, and a teleporting thief

I first read this around 2015, I think. There were at least three books in the series maybe four. I remember I started getting free copies of the book from the author in exchange for reviews until I gave him a bad review (deserved in my opinion) for getting too formulaic. It started with some sort of event giving people powers, leading to the government forming a team to keep order. I don't remember the full roster, but I remember it included

I don't remember much about the covers. They were Kindle books. Parts of the writing felt a bit like it was modeled after an RPG group's sessions. In particular, the bit where the robot hijacked the energy being felt like a "I want to play a different character" moment.

Thanks to Jenayah prompting me to page through my past reviews, I found that I apparently read all four of the initial books in 2016, and there's only five published in the series. It's Percival Constantine's Vanguard Superhero series. 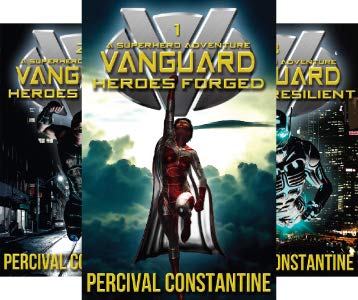 After a mysterious phenomenon called The Event, superhumans—called specials—now walk among us. And the potential danger these untested and powerful beings warrants a way to keep them in check. Enter Vanguard, a government-sanctioned team of superheroes designed to deal with rogue specials. This team of powerful beings with even more powerful personalities must overcome their differences while dealing with one life-threatening crisis after another!

But a mysterious warlord and his terrorist network waits in the shadows, planning to use superhumans for their own nefarious purposes!

Paging through the first book, most of the team is introduced in short vignettes. There's a female shapeshifter, a guy who can turn into a shark monster and gains super-senses, the teleporting thief who can also shoot dark energy blasts, a guy who can generate fire (and is immune to it), and a female telekinetic. Then, a military guy shows up and introduces a scientist to Zenith, a robot built by Nikola Tesla (I hadn't even mentioned that I thought he was built by Tesla because I was sure I was thinking of Atomic Robo). And then a super-tough female soldier is introduced after encountering a superpowered warlord, the Khagen, leader of the Red Fist.

Poking around the reviews, the time-traveler is Chronos, and shows up in the fourth book.

8
Identify story about gaming in a future with augmented reality
5
Trying to remember story or novel with a non-functioning assassin robot
3
Webcomic with a female undead gunslinger in a steampunk setting - not Back
3
Superhero book where a teenager accidentally manifests his powers when defending himself against a bully, only to learn that his father is a superhero
2
Ebook (Kindle?) involving a teenager railroaded into becoming a superhero versus aliens
11
Late '70s robot anime with a male protagonist who says “punchu cheezu” as he transforms into a robot head