YA sci-fi novel with megacorp controlling massive tornadoes, mastermind with fingerprints burned off

I'm looking for a standalone novel in English aimed at a teen audience. I read it in print between about 2010 and 2016 and it was relatively recently published at the time. I believe the cover had a tornado on the front as well as a vehicle.

A teenage girl moves with her father to somewhere in the midwest of the United States. By this point in the future (I think it was around the 2030s?) the Midwest was quite desolate due to the effects of massive tornadoes. The only human populations left were sheltered by large barriers and tornado-deflection devices created by the megacorporation that her father was moving to work for. They reach the headquarters of this company, which is entirely secured via fingerprint scanners. I believe the dad is relatively separated from his daughter throughout the rest of the book. While I can't describe the entire plot, I can describe some incidents.

Near the end of the novel, the protagonist also realizes that not everything is secured by fingerprint - there are a number of manual locks around. She figures out that the mastermind of this plan to control tornadoes, a woman who is a publicly(?) disgraced former director of the company, actually still controls the company's technology. She confronts her and the director makes a remark at some point during the confrontation about how the only way to go undercover was to eliminate all previously-used identifiers, which included her fingerprints.

The corporation may have been ramping up the size of their generated tornadoes faster than they planned or have lost control of the tornadoes, but I don't really remember which. The book also may have included better smartphones than the ones available today, but did not call them smartphones.

In the not-too-distant future, huge tornadoes and monster storms are a part of everyday life. Sent to spend the summer in the heart of storm country with her father in the special StormSafe community his company has developed, Jaden Meggs is excited to reconnect with her dad after he spent years researching storm technology in Russia. She’ll also be attending the exclusive summer science camp, Eye On Tomorrow, that her dad founded.

There, Jaden meets Alex, a boy whose passion for science matches hers, and together they discover a horrible truth about her dad’s research that is putting countless lives at risk. As a massive tornado approaches, threatening to destroy everything in its path, Jaden is torn between loyalty to her dad and revealing his secret. Can she find the courage to confront her dad and save everyone from the biggest storm yet?

Descriptions of the community they live in--where everyone's safety is guaranteed in writing--are really cool and futuristic. Everyone carries a data slate, which seems much like an iPad and phone combined.

"How come there's no bio-scan here?" I blurt out.

"Because you need fingerprints to make them work." She holds up one hand. Her fingertips are all scar tissue. "I burned them off when I moved away—too hard to disappear otherwise".

And the cover matches the tornado with vehicle description: 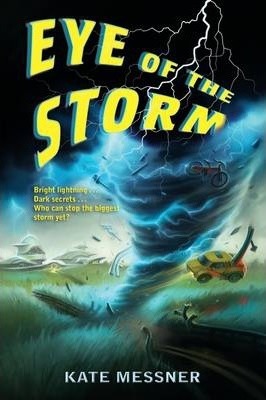