Are the organs with which Spider-Man secretes organic webbing ever shown?

So I understand that the webs Spidey uses are in fact generated from within his body and seem to project from his wrists (?) -- real spiders have spinnerets I think located on their abdomens.

Do the movies or comics ever get into details -- would a visual inspection of his wrists reveal an abnormality?

Spider-Man usually only has web shooters and the organic ones have occurred rarely in the comics and in the Raimi trilogy. To coincide with Raimi's trilogy and the change to have Peter have organic webs and not web shooters the comics also made that same change. To cut a long story short Peter is turned into a spider by Queen, births from the spider and ever since then his abilities were "replaced" and he uses organic webbing. He is once again back to web shooters since the "One More Day" arc though.

The Official Handbook of the Marvel Universe Spider-Man: Back in Black gives us some detail on this and how it works along with a nice diagram of how his webs are produced.

Since the Queen's transformation, Parker can produce silk from glands within his forearms, limited by his body's health and nutrition. These organic webs have many similar properties to the artificial webbing though they require a week to decay rather than decomposing within two hours. 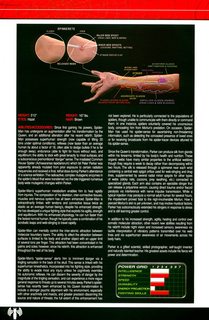 37
Why does Spider-Man shoot webs from his wrist in the movies?