Did all reindeer live in the Forbidden Forest? If so, how did he (and possibly Kristoff) escape the magical mist?

In Frozen 2 we saw reindeer herds inside the magical mist within the Forbidden Forest. I don't remember seeing them before though.

If that is the case, how did Sven escape the magical mist of the forest?

Since we never met Kristoff's parents (even when he was a small boy he seems to be alone), it makes me think maybe they were in the Forbidden Forest together and have a background story.

Is there any info about that somewhere?

There are reindeer living on both sides of the magical barrier. In the tie-in novel Anna & Elsa: Memory and Magic, we see a 'team' of reindeer being used to pull a royal sleigh in Arandelle.

Since the impenetrable barrier has existed since before Sven and and Kristoff were born, it seems logical that Sven's parents were not from inside the magical mist, but rather from a herd that lives outside it, possibly the same herd from which this team was taken, but more likely a wild herd living in the region.

On the morning of Anna’s fifth birthday, she woke up to a soft sprinkle of snowflakes above her bed. They drifted down from the ceiling of her room. But these weren’t just any snowflakes. Each one was like a tiny sculpture made of ice crystals. One snowflake looked just like Anna! Another looked like Elsa! There were reindeer snowflakes and snowflakes of the king and queen. Best of all, there were snowman snowflakes!
Anna was delighted. She noticed that the snowflakes were falling in a clear path leading out of her room. Eagerly, she hopped out of bed and followed the snowflake path through the castle.
The path led downstairs and out the front door. Anna pulled on a warm coat and followed the trail outside to the royal sleigh.
In the sleigh, Elsa was waiting.
“Happy birthday, Anna!” she told her sister.
Anna giggled happily.
A team of reindeer pulled the sleigh. They drove the sisters all the way to the frozen fjord. There, Elsa gave Anna her birthday present. It was a brand-new pair of ice skates!
Elsa helped Anna lace up her skates. The sisters stepped out onto the fjord. They glided easily across the ice.

We also see a pair of reindeer used by Iduna to propose to Prince Agnarr in the tie-in novel Frozen 2: Dangerous Secrets The Story of Iduna and Agnarr.

“Prince Agnarr of Arendelle. My kind, handsome, fearless love…” The butterflies swarmed around her, creating a halo around her head. Her eyes met mine. “Will you marry me?” she asked in a soft voice.
...
I ran to her and pulled her into my arms. The reindeer surrounded us, snorting and huffing, but I shooed them away, holding her close, until her face was inches from mine. She looked at me with those big blue eyes of hers. Eyes I could lose myself in.

And we meet an adorable baby reindeer in A New Reindeer Friend, set prior to Frozen 2. 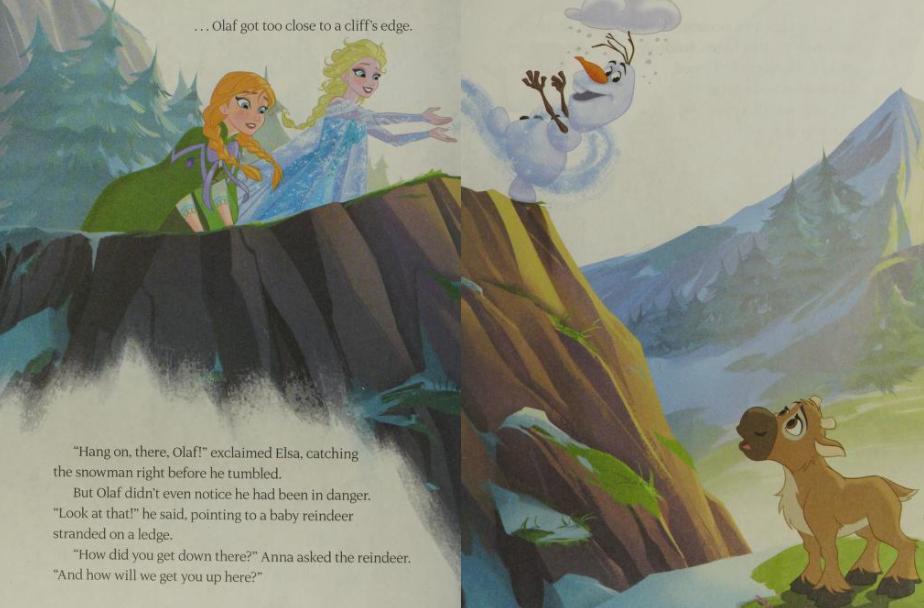 Not the answer you're looking for? Browse other questions tagged frozen-ii or ask your own question.

2
How did Elsa win over the water spirit in "Frozen II"?
5
Why did the Water Spirit destroy the ship when Elsa and Anna's parents were going to Ahtohallan?