I am looking for an old sci-fi book that takes place in the future. People are living to be hundreds of years old and a man gets the Nobel prize for inventing a new video game to prevent boredom. He meets a girl that works at a government job and they discover a secret. As they are trying to get away she gets captured and they hook her up to a machine that puts her into some kind of cryosleep. And that's all I can remember about it. I think it has game in the title but I can't remember. And I don't remember who it is by.

I think it was written in the sixties or seventies. I don't think that it is very far in the future now, maybe like 100 years or so. I do believe there were robots and flying cars, teleporters, I don't know. The video game technology i think is still consoles and some virtual reality. On the cover is a guy and a girl running in fear and they are in front of regular sized building shaped like pyramids. Right now that's all I can remember. 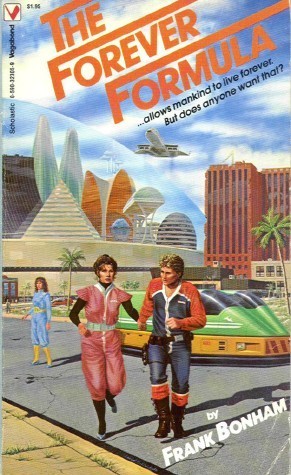 Is this possibly The Forever Formula by Frank Bonham? The plot is the son of a biologist who invented a longevity treatment gets sent to the future by cryogenic means. Everyone wants the improved formula in the young man's memories of his father, because the current process has horrible side-effects ("guppyism").

The protagonist falls in love with the nurse who helps his rehabilitation from the cryogenic sleep, but she gets kidnapped at the end and put into cryogenic hibernation herself, and must be rescued.

5
Help me identify book where main character enters virtual fantasy world
7
Book with virtual reality plot
8
Does anyone remember this old "trapped in a video game" anime?
4
Book: Orphaned girl. fire, dancer/acrobat, grandfather, backwaters, wolves, werewolves?
10
Book where a boy and girl are transported into a fantasy video game
3
Paperback book, read in the 1990s, involving a man's son playing a too-good pirate video game with friends who disappear
7
Fantasy book: man discovers a fantasy kingdom in his father's cabin, falls in love with a nymph/driad, is attacked by a bad guy who is his brother
10
Book about teenager who get trapped in a video game and the main character turns out to be an npc
7
Story about old video game console, a yard sale, and giant robotic cockroaches?