In the late 1960's or early 1970's there was a book series about a boy whose parents were research scientists on on an island. There was an explosion and he was blown into the water and somehow developed gills. I don't remember the author or the name of the series. Can anyone identify this?

I believe you are referring to Roy Meyers's Dolphin Boy, first book of his Dolphin Trilogy. 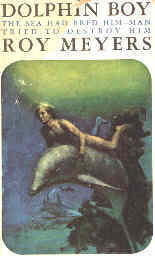 The wife of a researcher at Crab Island was exposed by accident to a high dose of radioactivity during her first trimester ("during the period of gill development") and her blond-haired son was born breathing so slowly that he was thought to be dead at first. He grew up normally otherwise until another act-of-God (an explosion) tossed him into the sea where he was rescued and raised by a dolphin mother who had just lost her own baby son. The month-old boy was suckled by its adopted mother and soon learned to hold on as his adopted mother, Mala, swam at full dolphin speed. Drinking the mammalian milk from Mala kept him alive until he was able to eat raw fish and shellfish.

As a young man he learned to swim effortlessly at twenty-five knots and to migrate with his dolphin family. In his late teens he rescued a human girl about his own age, Della, and the love story began in earnest. First, we are treated to the paradisiacal exile where the adolescent couple learned about love in a state of innocent nudity. Della soon fell in love with her Triton (as she calls John, the dolphin boy). They learned each other's ways - mostly John learning about fire, the sun, cooked food, and finally sexual intercourse. During a trip into the sea by John to visit his dying adopted mother, Della was picked up by a rescue ship and left a note for John on a scrap of paper.

When John returned, he found the strange marks but didn't know what they meant, or even what "mean" meant. Wisely he stored the scrap of paper on Crab Island. Later, after he was caught in the net of the Poseidon and was befriended by the crew, he discovered the import of the scribbles: that they represented Della's spoken words. Quickly he sped to Crab Island to retrieve the message and returned to have the crew read it to him. Soon they were on their way to Jamaica where Della said she was living with her family.

The usual love story ensued. The lost love was regained, then lost again due to a misunderstanding. Her father set such stringent rules for John to marry Della, that he felt sure his daughter would end up married to Mark, her old boy friend, instead of this undersea abomination. Requiring money to support Della, John proved himself a fast worker, and soon recovered deep-sea diamonds and treasure. With the help of a friend in the investment business, he became a large stockholder in her father's company. As soon as John's identity was confirmed by his unusual lung X-Rays, he became Sir John and also became the owner of his father's company by inheritance.

All's well at the ending: John had one more Herculean feat to perform. He had to rescue a threatened bathysphere from the bottom of the sea by using a sperm whale as a crane. Like an undersea Tarzan, John directed the rescue only after exacting a promise from the world community to stop harvesting whales. As unlikely as the premise of extracting a promise from the world community, in the thirty years since Ron Meyers wrote his novel, the harvesting of whales has almost ceased. Without an actual dolphin boy to educate us, we have come to understand that the cetaceans are intelligent creatures and deserve to be treated as well as humans are treated on this planet.

I happened to have asked after the second book, Daughters of the Dolphin, having read it at my grandparents' house, so the mention of "Triton" reminded me of it.

3
Science fiction novel about two girls raised with dolphins
1
Book, probably published before the 1980s, about a pair of teenage girls (twins?) raised by dolphins and slowly integrating into society

15
What is the book series where people become “Forged”?
7
Book with children disappearing and animal suicides
4
A book about a boy searching for his missing father, the spaceship navigator
7
Cyberpunk/Post-Apocalyptic Sci-Fi series from the 90s or 00s based in Manhattan
5
can anyone tell me the name of the sci-fi book series with a concorde like spaceship on the cover?
11
Identify story about boy in a driving license exam
10
Fantasy book series with non-human races and labyrinth
4
TV episode where family survives explosion in cave, everything else dead