How many R2 droid units were there according to canon?

We know that most Star Wars droids were designated using 4 letters of High Galactic alphabet (which is basically Latin so base 36 including numbers).

Is there any notion in canon of just how many R2- units were ever produced?

he R2-series astromech droid was a model of astromech droid produced by Industrial Automaton, boasting a level of success that was never equaled in Industrial Automaton's long history. A combination of excellent design, high-quality marketing, and good timing made this astromech droid one of the most sought after droids in history, and one of the few vintage astromech series still in active production decades after it was first designed, including the prototype R2-0. The line was so successful that the Galactic Empire took credit for the design.

Given the size of the Galaxy (millions? of inhabited planets, gazillions of beings), a production run of 260 - or even 1296 - seems to square very poorly with "one of the most popular astromeh droids in history with multi-decade production run".

Is there ever a canon explanation (ANY canon) for this?

Apparently, there indeed were tons (at least could have been tons) of R2 units to match the size of the Galaxy, because the 4-letter naming scheme was merely a human convention, out of laziness, to pick something to call their droid. In reality, a droid name was a long complicated GUID-like string, e.g. "R5-X41238-G8-R3-3124-D2", which is shortened by its owners (the starship of Queen Amidala crew) to "G8-R3", which was an astromech droid). 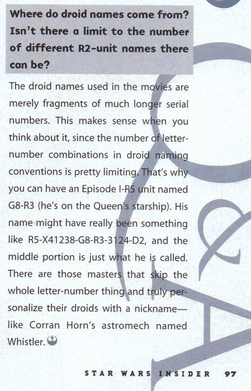 You'll note that R2-Z13 sort of breaks the supposed R2-$L$D naming scheme with a letter and two digits. While this doesn't provide a concrete answer, it does demonstrate that the naming conventions are not quite as limited as you originally believed.

While I haven't found any canon detailing the number of models, simple logic would tell us that it is impossible for there to be only 260 or 1296 R2 units, given the following facts:

Given just those two facts alone there must, by any logical standard, be far more than even 1296 Astromech droids. It's probably more likely that there are hundreds of thousands, if not millions or more R2 units out across the galaxy.

I think what is more likely, though I know of no canon to support it, is that given the nature of humans to give things short nicknames, R2-D2 is just the "short" version of a much longer identifier. It's probably something like R2-D23AF434DDOR219989, etc

There are canonical and Extended Universe R2-series units with 1,2, and 3 characters after the dash... and even a couple with 4.

Assuming a latin alpha-numeric system, you get effectively 37*37*36 (since you can't have 3 blanks), less 36*36 for blank-Char and Char-Blank being identical in end results. So, 47,988 without the rare 4th character.

If you are asking how many "types", you are right about 1296. But if you are asking the total numbers, by thinking of r2d2 being both a co-pilot astromech and a maintenance droid, 1 droid per fighter and many droids per capital ships, there would be more than tens-of-thousands maybe millions of them.

If you count the blackmarketting, there would be thousands with same name. (Anakin rebuilt c3po but could have build r2d2 easily i think )

2
Are droids' names unique?
34
Is there only one R2-D2 droid in the galaxy or were other R2-D2 droids made?
9
Do all droids have a four alphanumeric character name and does this have any significance?

113
Why Can't R2-D2 Talk?
10
Coruscant's Hyperspace Coordinates
27
Are C3PO and R2D2 different from normal Star Wars Droids?
6
How many battle droid units were created for the Second Battle of Geonosis?
33
Why doesn't Chewbacca learn to speak Galactic Basic?
5
How many droids were in the droid army and how were they paid for?
9
Are R-series astromech units obsolete?
6
What is the nature of Luke's scanner used to track and find R2-D2?
2
How many droid-smiths are in the Star Wars Universe?
19
How does R2-D2 — or any astromech droid — routinely get into and out of a T-65 model X-Wing in the timeline of the original trilogy?