Ask Question
Asked 2 months ago
Active 2 months ago
Viewed 880 times
11
This question already has an answer here:
What SciFi series has a female protagonist/pilot member of a small Earthly explorer corps? (1 answer)
Closed 2 months ago.

I am desperately looking for an old science fiction book, I only remember this much:

A woman (I believe) observes an ancient statue of an extinct race that indicates a point in deep space. After much research they arrive on a planet (perhaps frozen) where they are attacked by flying spheres that seem to want to destroy everything technological. After many investigations, at the end of the book they discover that these beings will arrive in 7000 years. I remember the phrase: "is what even the extinct thought"

This is Il Sonno degli Dei by Jack McDevitt (original title, The Engines of God). In Italy it was published by Urania, and this is the cover: 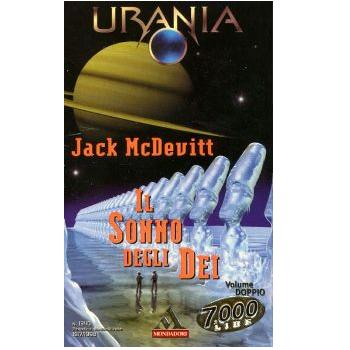 (you can still find several copies on eBay).

The scene you remember takes place on a frozen planet, in a system where they have located an incoming cloud and, to test the hypothesis, land and use a big laser to sculpt an ice mesa into geometrical shapes. Only, they're flying in a geometrical-shaped shuttle which too gets attacked.

8
What SciFi series has a female protagonist/pilot member of a small Earthly explorer corps?

7
Fantasy novel with an adventuring party with a female werecat, alcoholic priest
8
Title/Author search: read late 70's, last human revived from stasis, intelligent forest
34
What book has space arks crewed by slaves leaving earth?
2
Science Fiction Book or Story About Dragons
8
Science fiction book about rediscovering lost technology (perhaps on Earth)
33
Old science fiction novel about a man of the near future awakening from suspended animation to find himself in a technophobic theocracy
9
Searching after a science fiction book/series about Galactic war with a weaker Human/Alien Alliance vs. Another hostile alien race
7
90s (or earlier) sci fi book about demons being an ancient alien race
9
Science fiction book about tree people