I swear I've found this one before, maybe on another site. Somewhere between 1988 and 1992, my brother was allowed to borrow an IBM PC from the school (it was an anti-theft measure). I remember we played Hack (predecessor to Nethack), Brøderbund's Ancient Art of War, and a Hoyle card game. There was also an RPG, set in space. I don't think I ever played it myself, but I watched my brother and his friend do so. I remember there was a scene where you surprised a woman in a shower (nudity covered with a shower curtain) and there was an (optional, I think) encounter with a dragon. I remember that because my brother's friend was showing how to cheat to get the best equipment, which barely sufficed.

In my memory, the graphics were in vivid color and highly detailed, but the odds are good they weren't as awesome as I remember, since most games ran off of 3.5-inch floppies (although the computer had a hard drive), and the RGB graphics card was a major upgrade over the standard EGA.

Buck Rogers: Countdown to Doomsday comes to mind, but what I've found doesn't match up with my memories. Although, confounding this, I found a TV Tropes YKTS question where I was asking after this, and accepted Buck Rogers as the answer... I still can't find the two bits that I remember so vividly.

There were a number of MS-DOS RPGs with outer space settings around that time with prominent portraits of the characters your party would run into, although I cannot think of any that actually involved a dragon. Of course, there were plenty of aliens with varying degrees of reptilian characteristics though.

However, I did remember one game with a portrait of a seemingly naked woman wrapped in a sheet or covering. This is from Sentinel Worlds I: Future Magic, from 1988. She wasn't showering though, just cowering in hiding as the only survivor of a monster attack. Here she is: 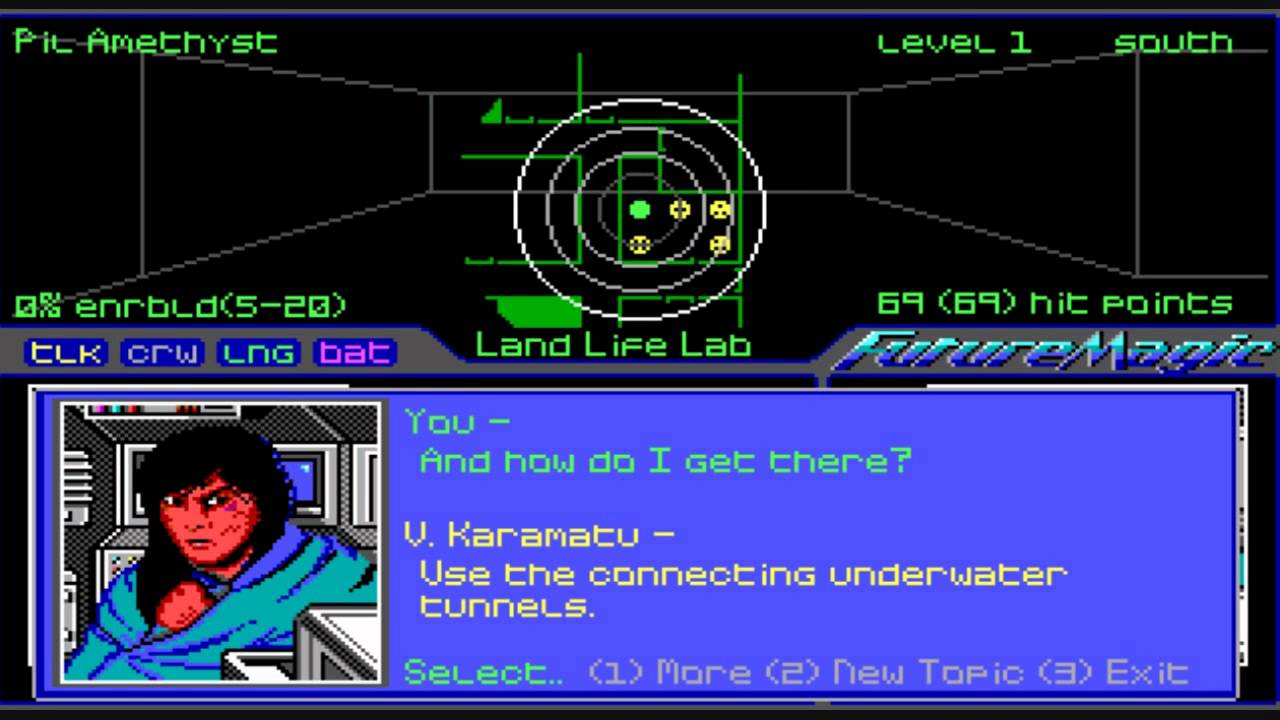 Moreover, I did not finish this game, so I cannot be sure that it does not have a dragon somewhere.

If that is not it, there are a number of other possibilities. There was no official Sentinel Worlds II, but the creator later made the spiritual sequel Hard Nova (1990), with a similar look. There were also two SSI Gold Box Buck Rogers games, with the sequel Buck Rogers: Matrix Cubed coming out in 1992. The last example I can think of with prominent character portraits is Starflight 2: Trade Routes of the Cloud Nebula.

3
90s Teen horror - boyfriend deal with demon
4
Children's book about a boy with a benign tumor but then discovered the tumor was his twin absorbed in utero and still haunts him
7
Seeking a game like Hunt the Wumpus but with graphics, RPG elements, and a balrog
9
Sci-fi manga about a boy with an alien girl classmate
6
80s/90s zombie(?) movie with a “stolen record” of a shower scene
1
Webcomic involving an armless girl fighting sea monsters
25
NES game with town building between RPG/Hack-and-slash levels
5
Early 2000s sci-fi game which begins with a castle being attacked and forcing the player underground; it had jet packs and futuristic weapons