Space opera book about a group of adventurers

It consisted of three or four stories, I remember one story: on a planet where the biggest casino is located a monster appears every night, and kills(steals?) one person. In this story main character is not the leader of the group, but a guy who was locksmith and hacker and spent a lot of time in casinos when he was younger. I read this in ~2000-2005, but the book is from ~80s I think.

Three From The Legion by Jack Williamson (1979)

The third story is "One Against The Legion". In the casino space station, the villain makes good his threat to kill the top winner, each night. He uses a teleportation machine. The Legion sends their top team, including Giles Habibula, master lockpick and former con man. The casino was created by an old acquaintance of Giles, indeed many of the cheats in the gambling machine were invented by Giles.

When Giles tries to thwart the villain, the winner is kidnapped, and a large monster is left in his place.

The leader was a member of the Legion, who was framed by the villain years ago. Leader escapes prison and travels space in an attempt to clear his name. 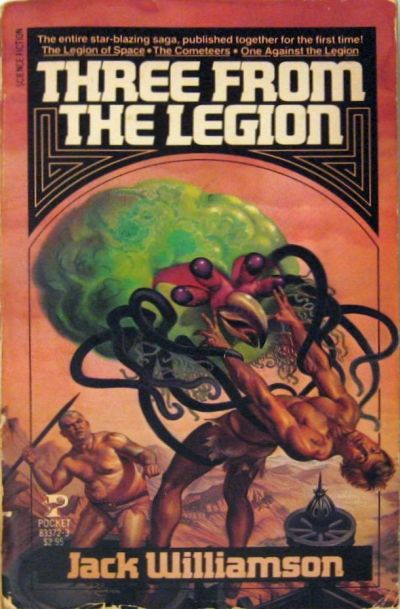 15
A book featuring the superweapon AKKA

5
Trying to find stories that were published on Fatalistic.net or Fatalism.net
11
What was this French comic, published circa 1990, involving a group of mages fighting?
8
Book: What book was about a virus trying to infect Internet kernels?
9
Horror monster attacks 1st Venus Expedition World War IV
8
B-class SF horror movie set on post-apocalypse Earth with a group against a killer-cyborg
5
Cartoon: 4 kids transform into video game characters to save the world from a hacker and an evil program