Does Batman's utility belt have any other "standard" equipment besides grapple guns, ropes, communicators, gas pellets, bombs and batarangs?

I was trying to find specifically what "base gear" a utility belt would have. In several comics, and even films, it's shown/stated that Batman tends to choose his gear based around specific threats or mission parameters, or what he expects he might encounter. For instance, he doesn't have enough Kryptonite to fit into all of his belts, but makes sure to equip and carry it should he be dealing with Superman or other Kryptonians.

So I was just curious as to the "basic gear" most belts would have. From comics and various media observation, as well as the Batman encyclopedia, for most missions, this would include:

I'm uncertain if there is anything else he always carries into battle, though.

Is there any canon source which makes this plain?

Note: I'm willing to take answers that take into account the different "Eras" Batman worked in, because the technology of the time would inform his gear. However, for simplicity, we should probably stick to the modern era [Post-Crisis] versions, and try to be as broad as possible.

Also, this would be most specific to examples of weapons, as most of the gear mentioned above is used for something other than "direct" combat.

Also, looking at different media interpretations, from comics to video games, is fine; it can help us build a somewhat "general" list.

Whatever Bat-gadget is considered "never leave home without it" varies by depiction (comic series, TV show, movie series, etc). Sometimes changes to the standard arsenal are part of the setting: futuristic versions of Bat-gadgets and the Batsuit in Batman Beyond are intended to set it apart from Batman: The Animated Series. Your list does cover many staples common to several depictions.

Even within each depiction it's not easily apparent what those gadgets are because Batman does not take out every one in a single sitting. People have attempted to catalog gadgets of the utility belt in wikis for Batman TV shows or movies, though you will have to watch the source material to make your own opinion of which gadget is standard besides the staples like the batarangs and grapple gun. Assuming that a gadget that shows up several times for no obvious plot reason is one that is brought into battle regularly, one particularly bizarre gadget not yet mentioned is a belt sword in the animated TV series Batman: the Brave and the Bold. 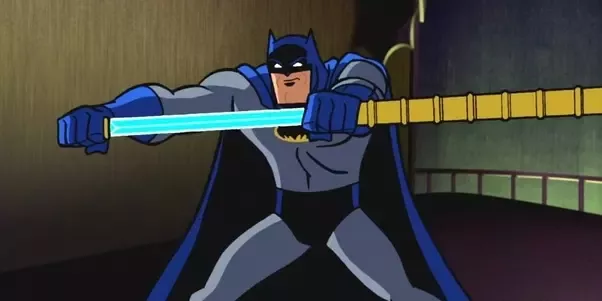 It's worth pointing out the various diagrams you can find will not necessarily follow the source material, whether by adding gadgets to fill up space or omitting gadgets because they aren't visible on the belt. Here's one based on the belt depicted in the Dark Knight film trilogy, and there are several gadgets never used on-screen while the oft-used spherical bombs are nowhere to be seen (and depicted in Batman Begins to be too thick to be stored in the pouches or cylinders).