I am trying to find a manga i read about 10-15 years ago. A lot of the details are barely remembered, but the final chapter or so stands out in my memory.

In the final chapters the main character fights with the main enemy who i think was his former best friend. The main character loses an arm. The fight ends with both still alive, i think. All the people with powers the main character and friends were fighting against end up leaving or stopping, i forget if this was somehow leaving the planet, moving to a new country, or something was happening that would merely make everyone lose their powers.

The main character then talks to someone else, i think the love interest, and explains that he figured out his own power isn't what was thought all along. He could cause burns, but he reveals that recently he figured out his power is actually regeneration, or some form of life manipulation. the burns were caused either by extreme heat of replicating cells, or his touch could stop the regeneration of cells, one of the two. He also reveled this meant he could restore his arm, but he wouldn't. It was something along the lines of that would disrespect or anger the friend/enemy.

I think there was a chapter where the main character ended up getting separated and traveling through snow and comes across a cabin. It then turns out one of the enemies is in the cabin. though this might be me mixing it up with another manga.

Toward the end, the main character's friend loses his arm. 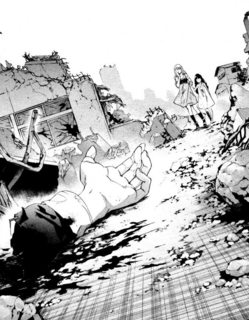