Was there a Biggs Darklighter scene on Tatooine in "A New Hope"?

I was recently watching Star Wars: A New Hope on DVD with my grandson. Biggs Darklighter spoke to Luke in the hangar bay and I was asked "Who is he, grandpa?"

I explained he's the one who was with the girl in the cafeteria on Tatooine, they were teasing Luke about being a farmboy. I got a puzzled look because it wasn't on DVD.

I dragged out my VHS player and put in my old shop-bought A New Hope videotape from the 1980's - no such scene.

I then searched and found another tape of it that I'd recorded from television many years ago - no such scene.

I mentioned this to a lifelong friend, we'd went to see A New Hope original run as teenagers in the 1970's. He looked puzzled and said he hadn't seen this scene.

It's like a reverse Mandela Effect, I know I saw this cafeteria scene. Was there ever a version of Episode IV that showed it?

There was an interactive DVD-ROM released on PC in 1998 called Star Wars - Behind the Magic that this, and a few of other deleted scenes, appeared on.

If you ever owned that, it's possible that this is where you saw it.

The scenes with Biggs, Cammie and Luke's other friends were included on (among others) the (2011) Complete Bluray edition, which is where you're most likely to have seen it since it was never included in a release version.

There is, however, the possibility that you saw it on one of the various bootlegged "despecialised" editions that have popped up on the internet (incorporating these scenes into A New Hope) or read the Official Novelisation or Comic Novelisation in which these scenes also appear.

In addition to prior answers, another place one might have seen this (and perhaps the earliest) is in Marvel Comics Star Wars #1 (July 1977), with art by Howard Chaykin. Clearly this was based on an early cut of the movie including that scene. I similarly had this moment in my head for many years, thinking it was in the movie, before ever seeing the actual film footage. 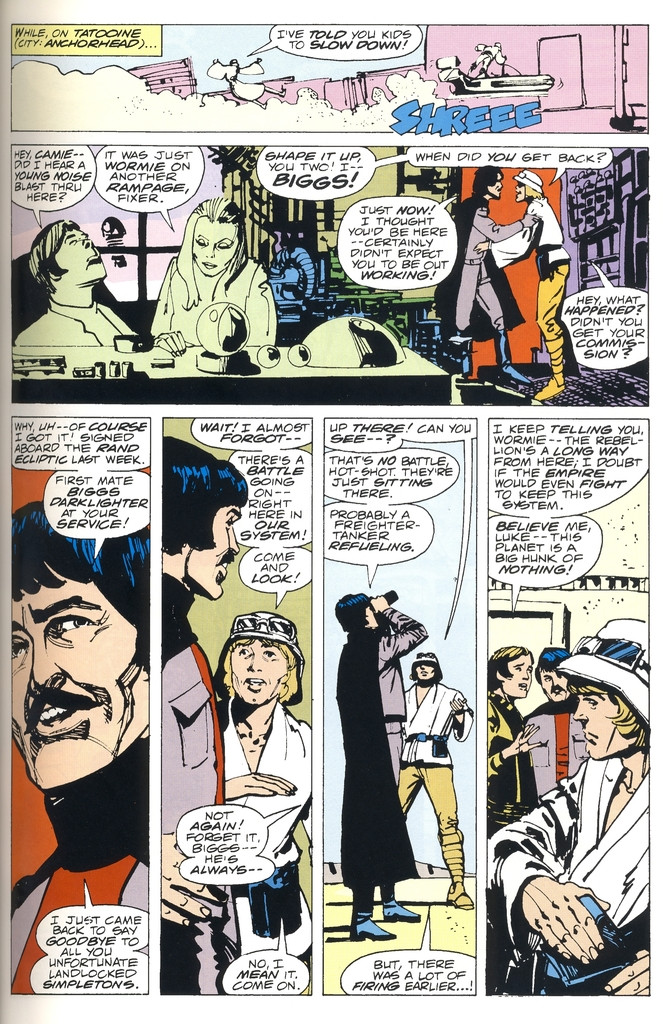 There was a Star Wars Storybook that was published in the late 1970s or early 1980s, and it showed a photo of Biggs and Luke meeting on Tatooine, along with a summary of that scene. Thanks to that book, for the longest time I thought that scene had been included in the theatrical run, but got cut whenever the movie was shown on TV. It wasn't until the late 1990s that I realized it was a deleted scene.

The scenes with Luke at the moisture evaporator looking up with binoculars at a space battle and also at Tosche station talking to Biggs, were included in prints that went to only about 12 theaters. I saw it myself in Louisville KY. opening night. I was 16 at the time and returned to see the same version several more times. A couple years later I saw it again at the same theater and noticed the first several minutes of the movie were missing. I have talked to others that also remember seeing the deleted scenes. This information used to be on the web, but has disappeared over time.

I'm familiar with that scene from having watched this YouTube video, about how the movie was saved in the edit. (Link queued to the part I believe you've mentioned)

The Yavin hangar scene was included in a rough cut reportedly shown to Stephen Spielberg and Brian De Palma by George Lucas during post production. This version had certain issues with pacing of narrative structure, among other things. Marcia Lucas won an Oscar (best editor) for her significant work on the original theatrical release, of which the Biggs scenes at Toschi Station (?) and the Yavin hangar were dropped.

Images, and TV and 8mm footage did reach the public during this period though. I remember being introduced to Star Wars thanks to a friend of my Dad's, a work colleague showing off his 8mm film projector. He only had the scene where Uncle Owen purchases the Droids. I wonder if anyone saw leaked footage in this manner.

There were a lot of stills featured in magazines like Starlog, and cut footage such as original Jabba, Biggs, Luke watching the opening space battle from the ground etc. may have featured in televised special effects documentaries of the era.

The hype surrounding Star Wars was almost insane, and without the benefit of the internet, fans relied upon leakers, TV broadcasts, videotape and laser disc, magazines, postal fan clubs, and word of mouth for exciting and obscure crumbs of info.

1
Did you see Luke and Biggs on Tatooine at one of the 1977 screenings of Star Wars ("A New Hope")? If so, can you please provide corroboration?

23
What was the Rebel victory prior to A New Hope?
110
Why was Han Solo on Tatooine?
6
Is there a version of A New Hope with most/all the deleted scenes edited in?
13
Elements of The Force in A New Hope
10
What happened after Alderaan blew up in A New Hope?
6
What is this rebel pilot's backstory?
0
What are the pilots in A New Hope talking about?