In Buy Jupiter and Other Stories (1975), which includes autobiographical notes between stories, Isaac Asimov wrote,

I had sold my first book, PEBBLE IN THE SKY, some six weeks before I had accepted the job at the medical school. What I did not know was that Doubleday was going to exploit my new professional position in connection with the book. It was only when I saw the book jacket, toward the end of 1949, that I saw what was to be on the back cover.

Along with a very good likeness of myself at the age of twenty-five (which breaks my heart now when I look at it) there was a final sentence, which read: "Dr. Asimov lives in Boston, where he is engaged in cancer research at Boston University School of Medicine."

This was 1949, when many people considered science fiction to be trashy. Asimov was so concerned about involving the medical school's reputation that he volunteered to resign from it. The Dean merely asked if it was a good book, and when Asimov answered in the affirmative, he said, "In that case the medical school will be glad to be identified with it."

The first edition of Pebble in the Sky was published on 19 January 1950.

I remember reading this blurb in a library copy as a teenager. Asimov's smiling face was looking upward and a little to the side, as if to show his aspiration to reach the stars. It was an inspirational likeness and has been reproduced in his autobiography, In Memory Yet Green. I'd like to read the blurb again, to see in context what so upset Asimov that he offered to resign. Can anyone supply it from the dust jacket of the 1950 edition?

Legible if you view full size. 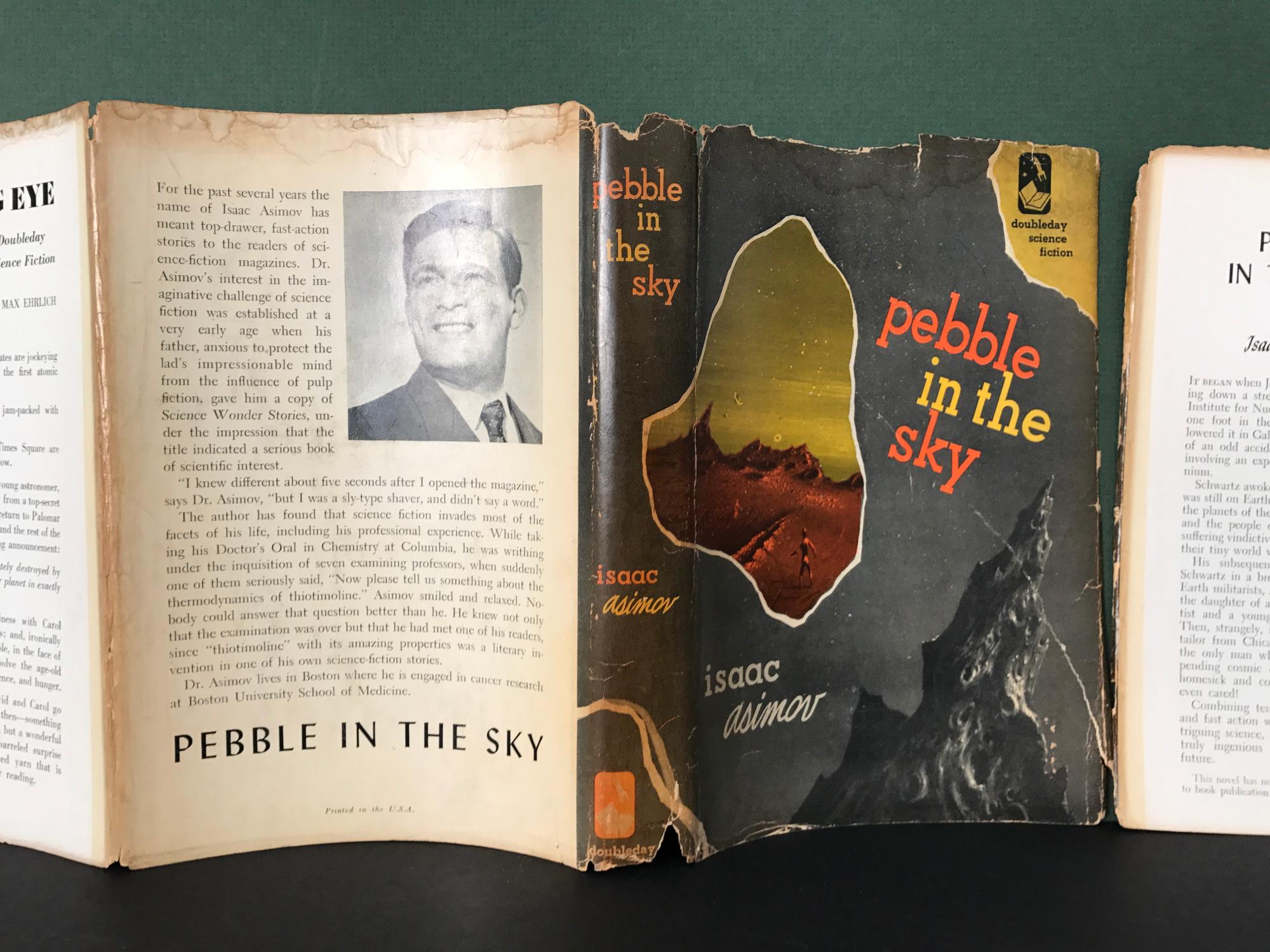 For the past several years the name of Isaac Asimov has meant top-drawer fast-action stories to the readers of science-fiction magazines. Dr. Asimov's interest in the imaginative challenge of science fiction was established at a very early age when his father, anxious to protect the lad's impressionable mind from the influence of pulp fiction, gave him a copy of Science Wonder Stories, under the impression that the title indicated a serious book of scientific interest.

"I knew different about five seconds after I opened the magazine", says Dr. Asimov, "but I was a sly-type shaver, and didn't say a word."

The author has found that science fiction invades most of the facets of his life, including his professional experience. While taking his Doctor's Oral in Chemistry at Columbia, he was writhing under the inquisition of seven examining professors, when suddenly one of them seriously said "Now please tell us something about the thermodynamics of thiotimoline." Asimov smiled and relaxed. Nobody could answer that question better than he. He knew not only that the examination was over but that he had met one of his readers, since "thiotimoline" with its amazing properties was a literary invention in one of his science-fiction stories.

Dr. Asimov lives in Boston where he is engaged in cancer research at Boston University School of Medicine.

Not the answer you're looking for? Browse other questions tagged isaac-asimov publishing or ask your own question.

19
What was Isaac Asimov's first work?
18
Does the Foundation from Asimov's novels have an emblem?
4
Can you read Isaac Asimov's Rest of the Robots without reading I, Robot?
48
When does the copyright on Isaac Asimov's works expire?
73
What prevents Asimov's robots from locking all humans in padded cells for the humans protection?
15
Do the Jovians in "Victory Unintentional" exist in Isaac Asimov's Foundation series?
4
Why are there incomplete extracts from the "Encyclopedia Galactica" in Asimov's "Foundation" novel?