Ask Question
Asked 11 months ago
Active 11 months ago
Viewed 337 times
10
This question already has an answer here:
Teenagers find an ancient lizard creature in stasis and accompany him on adventures to an undersea city (1 answer)
Closed 12 months ago.

A very long time ago I read a paperback at school, it was one of if not the first SciFi books I ever read. I would like to try and find a copy but being so long ago I have no recollection of the author or title.

As I recall the plot involved the following.

A couple of divers discover a sarcophagus hidden in an underwater grotto. It contains a woman in suspended animation. She is from a long lost city which may or may not have been Atlantis. (I can't remember.) They bring her sarcophagus on to their boat and revive her.

Later in the book they discover her city still intact deep underground. They also discover still living an enemy race of the woman's civilisation. The enemy may or may not have been humans, more likely not.

I think it ended with the enemy being defeated but at the cost of the buried city either also being presumed destroyed or lost by descending even deeper in to the Earth.

Stranger from the Depths (1967) by Gerry Turner

After sleeping for thousands of years the last survivor of a lost civilization returns to life to reveal secrets of the earth's core never imagined. 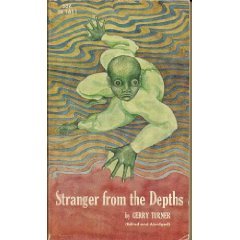 I found this with this Google query which turned up this related SFF story id. The answer there has found a nicely matching summary:

"After sleeping for thousands of years the last survivor of a lost civilization returns to life to reveal secrets of the earth's core never imagined."

"a fantastic tale of two brothers who encounter strange beings who live below the ocean floor."

"It came out in the early 70's and was about the discovery of a coffin shaped stasis box buried under the ocean containing the last surviving member of an intelligent amphibious race..." "...a green man with webbed hands and feet"

"...underwater cities of Haad and Gaan"

"...A statue of one of the reptillian people. One of the reptillians separated from his people (maybe because of suspended animation?), ... The book started off with the protagonists setting up to photograph a tidal wave, with the wave washing away the rock exposing the diamond statue. The lizard's name was 'Saa', he liked peanut butter and jelly sandwiches..."

"... first Gary and his older brother filmed a tsunami, after which they came across a small statue of a mysterious ... Then Gary and his ... girlfriend Lori 'fess up about the underwater cave they've been sneaking away to, leading adults to organize a diving expedition to see what's down there. They find a large cavern containing a suspended animation capsule that contains a dead ringer for their statue. After they manage to revive him, their new friend Saa leads them down to his abandoned city underwater."

8
Story about people who travel through desert, have airships, consisting of two books
5
Book where girl can grow nails and might be a thief
6
What sci-fi novel has a technology called “Plaax” and a character named “Gifon”?
15
1980s story about descendants of NASA scientist living in underground cities after solar flares destroyed civilisations
33
Main character wakes up from a suspended-animation “test” to discover that the world has fallen apart
12
Short story about a space combat/chase that can never be resolved due to the deltaV between the ships
14
Short story where the hero quotes “Full Fathom Five Thy Father Lies” while having an underwater adventure
18
TV show episode about an afterlife predator