What is Valkyrie's real name?

Valkyrie in the MCU is only referred to as Scrapper 142 or Valkyrie. Of course this doesn't appear to be her real name as she was a Valkyrie so it's probably an alias instead.

Thor: My God, you're a Valkyrie. I used to wanna be a Valkyrie when I was younger... until I found out that you were all women.

The official scripts for both Thor: Ragnarok and Avengers: Endgame only call her Scrapper 142 (before it's revealed she was a Valkyrie), Valkyrie or Val for short. No mention is given of her real name.

I've seen mention, such as the MCU fandom wiki page, that her real name is Brunnhilde citing back to this tweet by Tessa Thompson, the actress who plays Valkyrie.

@truthfulcomics: One of my favorite things in #ThorRagnarok is that @TessaThompson_x isn't THE Vakyrie (Brunhilde), she is A Valkyrie (a very kickass one); more than likely saved by Brunhilde's sacrifice as shown on that Flashback scene. THNX 4 respecting the source material @Marvel #Valkyrie

@TessaThompson_x: Oh. But she is THE Valkyrie. That’s why she has this sweet hashtag #TheValkyrie . And see, she looks like me.

Of course as this is the actress though it's not exactly official and the tweet isn't 100% explicit on the matter anyway so I wouldn't take it at its word. I've also seen in the past a POP Funko of Valkyrie where the description on the website mentions Brunnhilde but again this isn't exactly canon.

A common argument I've seen against her being Brunnhilde, aside from the above, is that Tessa doesn't really look like her comic counterpart (not a big deal) but one of the other Valkyrie in the flashback does. The Valkyrie who sacrifices herself for Valkyrie looks like the 616 counterpart (being blonde with platted hair). 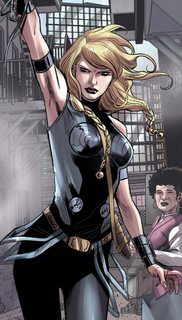 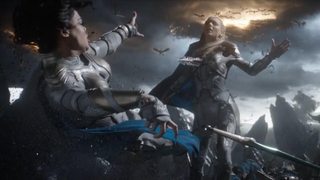 What's more is that there was concept art for Thor: The Dark World to have Valkyrie, Brunnhilde, to appear but it was ultimately dropped. This concept art matches the 616 comics version of Brunnhilde and she does look somewhat like the one we see in the flashback scene from Thor: Ragnarok. 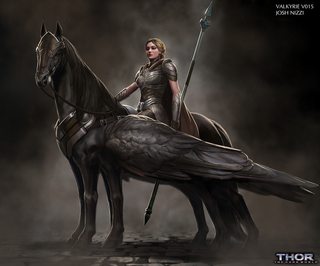 Is there any official confirmation of what Valkyrie's real name is? I'm looking for something from an official appearance in the MCU that I've missed, or a quote from someone more official than the actress at Marvel who may have said it, like a writer or director etc.

At the time of writing this answer there is nothing in MCU canon that references a name for the character Valkyrie. Credits and official promotional material, only names the character as Valkyrie.

There are plenty of fan/public maintained wiki sites that name the character as Brunnhilde, but I can't find any attribution to this, apart from the Twitter exchange Tessa Thompson had with a fan that the OP mentions.

The term Marvel comics Valkyrie is slightly problematic. There are multiple Universes in Marvel Comics, one of which has a Valkyrie who looks a lot more like (but still slightly different) Tessa Thompson than the typical blonde Nordic type of the normal Comic book universe (616).

Alternate Universe Valkyrie (no other name given)

There have also been several people who have been known as The Valkyrie, but they have all been one of the following, actually Brunnhilde, using Brunnhilde's powers (also appearance if they didn't look like her to begin with) or their body was possessed by Brunnhilde.

The MCU can play fast and lose with the similarities between on-screen and comic versions of the same characters, with vast differences between backstory (like Captain Marvel), sex (like the Ancient One in Doctor Strange), time period (like Star Hawk from Guardians of the Galaxy), visual appearance(like Baron Mordo) and names (like Whiplash). And that's not even including Agents of Shield. 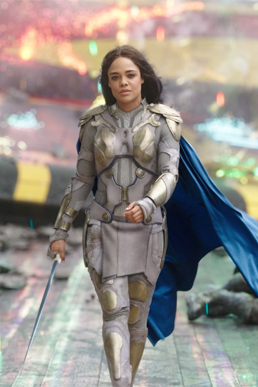 can still be a version of the Marvel 616 Universe Valkyrie 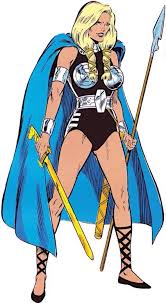 even if there are differences in look and backstory.

There is also another indication that both Valkyries are different versions of the same character. Marvel.com actually states here that the MCU Valkyrie's sword is named Dragonfang, which is also the name of Brunnhilde's sword.

In regards to the more Nordic looking Valkyrie that dies in the flashback scene, this does confuse issues a bit more. Brunnhilde, in the comics 616 universe, was the leader of the Valkyrior, but she wasn't the only one to lead. In the comics, while Brunnhilde was running around on Earth (or dead, that's happened a few times), Valtrauta was given leader duties who is (in the comics) very similar in appearance to Brunnhilde and the Valkyrie who gave her life for The Valkyrie in Thor: Ragnarok. 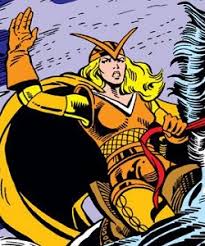 Then again, all of the classic members of the Valkyrior kinda looked like that. 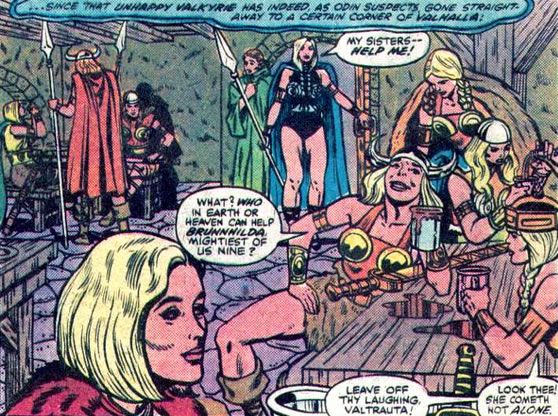 24
In what sense are Asgardians "immortal" in the MCU?
4
What is Apocalypse's real name?
6
What was Aida’s real plan?
1
Why was Hela’s name changed?
12
Is there an objective answer to who "the strongest Avenger" is?
10
Who saved "Scrapper 142"?
12
Can Hela be killed?
18
How, if at all, was Thor unaware of Hela?
10
Why did Miles Morales get non-spider-like powers (bio-electrokinesis and invisibility) that are vastly different from the other spider people?
15
What is Quentin Beck's real name?