If the "New Adventures of He-Man" is the SAME He-man from Masters of the Universe, WHY is he so much WEAKER?

You can watch the Filmation He-Man and At least once per episode, he will do something that is unarguably super human in his strength; shattering a mountain [or picking it up], drilling through the earth, leaping over a canyon, and tossing so, so many bad guys and landmasses: 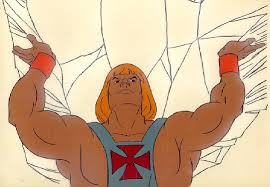 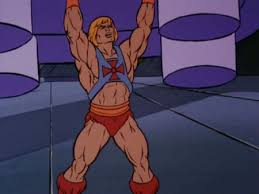 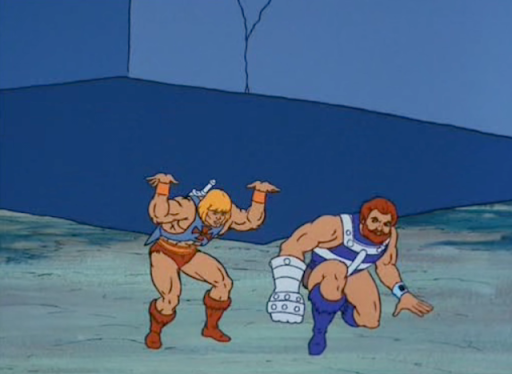 He did a lot to show himself as "the most powerful man in the universe!"

His The New Adventures incarnation.... not so much.

This He-Man seemed far more dependent upon his [redesigned, sleeker, weaker looking] sword. To his advantage, this sword had more abilities than a Hogworts wand!; He-Man could generate blasts of pure fire, light, concussive force, even energy ropes he could swing off, and the sword could still cut through [most] stuff with one swipe! So in terms of utility, he had the original matched....

Honestly, I couldn't even find a gif of any strength, speed or power feats, though! To my memory, the purest feat of "strength" I saw this He-Man do was catching a 2 man space patrol ship, which was roughly the side of a Bi-plane...and he looked stressed for a second when doing it.

Considering this was supposed to be the same character, I found his lack of He-Man like strength.... underwhelming.

Then again, i remembered this was far into the future, on a different planet (Primus) from Eternia. Perhaps gravity, or time, or distance from Greyskull could have affected his strength on some level.

Was there any in-story reason, explanation or even hint as to why that He-Man was so much less strong?

Browse other questions tagged powers he-man or ask your own question.

38
Why does Spider-Man shoot webs from his wrist in the movies?
13
How did Skeletor lose to He-man when he had powers of the universe?
4
Does the new Netflix She-Ra recognize He-Man and Eternia at all?
4
Why didn't the Eternian Army help, or even offer any aid, to Etheria against the Horde?
1
True or False: Is there a New He-Man and the Masters of the Universe film coming?