Several times throughout the helicopter chase scene in Terminator 2, the T-1000 is shown with three to four hands. Why? 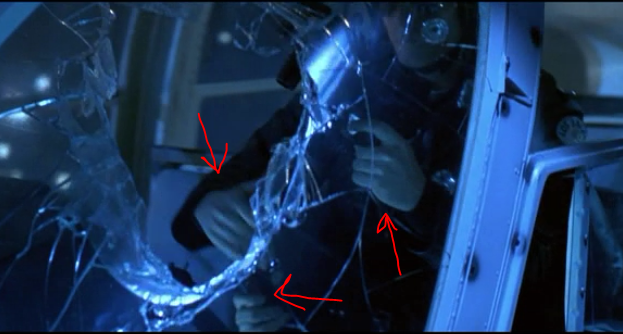 There are three reasons that can think of for this.

Are any of these, or something else, the reason?

The multiple hands were intentional by the film makers. James Cameron actually discusses it in the commentary on the T2 Ultimate edition DVD. He points out that in order to fly the helicopter and fire a weapon at the same time the T1000 has grown a second set of arms. So the answer is yes to the first point you make, (possibly he does not deploy additional arms before this as he has a need to pass unnoticed as a human to locate his target) no to the second point, it was definitely intentional, and yes to the third point.

Not the answer you're looking for? Browse other questions tagged the-terminator-series behind-the-scenes terminator-2-judgment-day or ask your own question.