How many Hutts are there?

Around the time of the Battle of Yavin, how many Hutts are there in the galaxy? Having seen the Grand Hutt Council in The Clone Wars which included Jabba and hearing about Gardulla from a young Anakin during a conversation with Qui-Gon and Padmé in The Phantom Menace and although the Hutts are their own species I would assume that there is not too great a number of them.

The Hutt can control a large amount of resources, money, travel zone and spice and was known to make deals with the Republic, namely with the Jedi in The Clone Wars film (special mention to Rotta) and T.V. series, and the Empire in the Darth Vader comic series and have a large amount of pilots, bounty hunters, slaves etc but never seem to be surrounded by their own.

If this question is too broad or the number is improbable please comment and I will remove.

If possible can the answer be from pre-Disney canon? Either EU or Legends answers will be accepted.

The Star Wars Essential Atlas lists the population of Nal Hutta as seven billion. The Hutt population is 43% of that, or just over three billion.

It also mentions other Hutt-controlled worlds with significant Hutt populations albeit without specific numbers but I think we can assume at least millions. 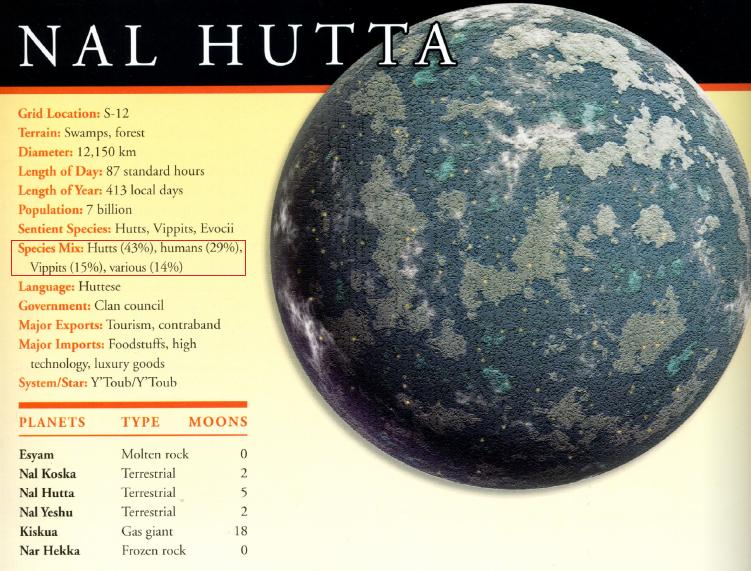 Not the answer you're looking for? Browse other questions tagged star-wars the-clone-wars jabba-the-hutt or ask your own question.

30
Why/How is Boba Fett considered a Mandalorian?
6
How do Star Wars bounty hunters fulfill criminal and government contracts?
26
If “spice” is considered an “illicit/illegal” drug in the Star Wars universe, why does the Empire mine it?
54
Why are credits "no good" on Tatooine?
10
What was the state of the Hutt military?
11
Did the terms of the bounty on Han Solo change between “Star Wars” (1977) and “The Empire Strikes Back” (1980)?
5
Do other Hutts consider Jabba a sexual deviant?