Novel where a mind control device is used to commit murders

I'm looking for a sf story I read years ago. It has to do with mind control by the controller wearing a headgear of sorts. Significant scenes in this story have scuba divers cutting one driver's throat as sharks circle in, another involves jumping feet first into a turning cement mixer. And entering the mind/body of a person suffering from leprosy and, of course, leaving immediately due to the intense pain. In all these scenarios the controller leaves the controlled as soon as the activity (i.e. throat cutting) is accomplished. The ending is unexpected and yet not surprising if you think about it. My sf library is approximately 1800 titles, but I'm at a loss of locating it. Any help is appreciated.

A Plague of Pythons, by Frederik Pohl.

It was first published in 1962 as a two-part serial in Galaxy (part 1 and part 2 are available at Archive.org, or you can read both parts at Project Gutenberg.)

Later, Frederik Pohl expanded it into a full-length novel and it was published by Ballantine in 1965.

Finally, in 1984 DAW published a revised edition as Demon in the Skull. 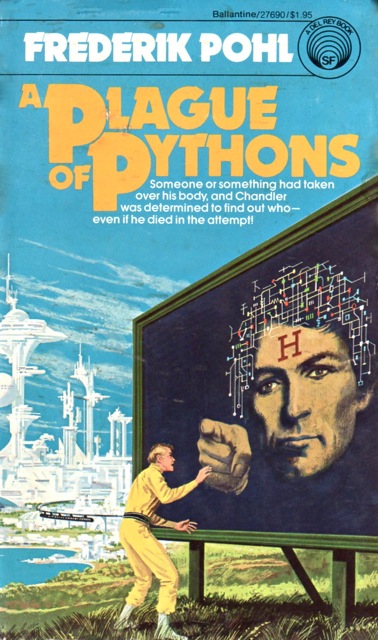 Wikipedia has a plot description:

The novel opens in a world reduced to a grim struggle for existence after a plague of madness that afflicted individuals at random. ... [People] began claiming to be "possessed". They would commit crimes of violence, but afterward they would claim to have had no control over their actions. This leads to superstitions about demonic possession, as well as a novel legal defense.

Chandler is an electronics engineer who is on trial for rape and murder. He claims to have been possessed while committing the crime, but nobody believes him ... [He is] exiled from his community with a letter "H", for "Hoaxer", branded on his forehead.

He encounters a cult who use pain to ward off the possession. ... he encounters people who, while not always possessed, do what their "execs" tell them for fear of the consequences of disobeying.

... Chandler learns that the possessors are indeed people. They wear silver coronets which give them the power, using a new technology. Based on what the novel calls "sub-millimeter microwaves" (now known as terahertz radiation), the technology allows people wearing the coronets to locate and take over the bodies of anyone on Earth.

The scene you remember about the cement mixer is in the serialized version. It's just a brief section, really:

"My own brother was out there for a week, last Statehood Day. He jumped feet first into a concrete mixer, and it took him seven days to die after I put him on my shoulder and carried him out there. I didn't like it, of course, but I didn't exactly have any choice; I wasn't running my own body at the time. Neither was he when he jumped."

The mind control device works over radio, and is eventually refined into a simple coronet worn over the head. The people who wear the coronets are called execs, and they effectively rule the world.

It was a very fat old man, almost bald, wearing a coronet of silvery spikes. ... She wore a coronet like the fat man's, intertwined in a complicated hairdo....

It was a weapon. It was more than a weapon, an irresistable tool—more than that, the way to end all disputes forever. It was a simple radio transmitter (Hsi said)—or so it seemed, but its frequencies were on an unusual band and its effects were remarkable. It controlled the minds of men. The "receiver" was the human brain. Through this little portable transmitter, surgically patch-wired to the brain of the person operating it, his entire personality was transmitted in a pattern of very short waves which could invade and modulate the personality of any other human being in the world.

... [The transmitter] ultimately was refined into the coronet Chandler had seen on the heads of Koitska and the girl

There is a reference to leprosy:

"Lep—" began Chandler, but the doctor shook his head.

"No, no, never say 'leprosy.' It's 'Hansen's disease.' Whatever it is, the execs were sure scared of it

At the end of the book, Chandler has a coronet and he spends hours jumping from body to body, staying just long enough to kill the body:

He had spent the night killing, killing, killing, and blood had washed away his passions; he was spent. He had killed every exec he could find, in widening circles from the building where his body lay. He had slit his dozen throats and fired bullets into his hundred hearts and hundred brains; he had entered bodies only long enough to feel for a coronet, and if it was there the body was doomed;

The scuba scene is in the novel, but not the serialized version. It occurs toward the end, when Chandler and his lover Rosalie both have coronets and are borrowing some bodies to go for an underwater scuba adventure. They are attacked by sharks. Rather than escape, well:

There were sharks, all right. ... Chandler was frankly terrified. ... It was no good telling himself that this was not really his body, that his own flesh lay secure in a split-level living room twelve thousand miles away; he cringed from the threat of the grim, silent shapes and it was all he could do to stay in this threatened corpus to see what Rosalie wanted to do.

He gave her the knife. She glanced upward at the sharks calculatingly, then pursed her lips, winked, blew him a kiss and neatly, carefully, sliced his airhose in two. ... She ripped off her own facemask and slit a careful line across the eighteen-year-old's borrowed abdomen, then reached out her arms to him.

Not the answer you're looking for? Browse other questions tagged story-identification novel military-sf or ask your own question.