I'm looking for a member of the Green Lantern Corps, somewhere during the Blackest Night run. I've looked through all the members listed here, but no luck.

He was not widely used, but he was mentioned as making constructs crazy fast. I think he was noted as being some kind of general as well.

They were not human, but I do believe they were humanoid.

You're looking for General Kreon as he was re-introduced during Green Lantern #12 (2006) as one of the "Lost Lanterns" that Hal Jordan killed when he was Parallax. Not part of the Blackest Night arc, but very shortly before.

General Kreon is one of the greatest and most decisive war leaders in the universe. You never see a beam from his ring. The construct is just on or off. His mind's that fast.

You are talking about Kreon of Tebis, Green Lantern of Sector 2002. (DC Database entry here.) 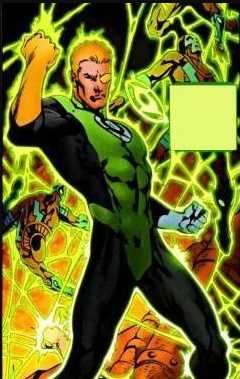 Kreon was one of the "temporary" Green Lanterns recruited by Hal Jordan before he went crazy and killed anyone in his way to Oa during Emerald Twilight. Wikipedia says "At one point, he was described as one of the greatest and most decisive war leaders in the universe. His signature trait as a Green Lantern was that his ring never showed a beam; his constructs were simply 'on' and 'off', suggesting that his mind apparently moved quite fast."

Kreon was depowered by Hal Jordan, then taken by the Manhunters to Biot to power a series of stolen power rings. Kreon died when Hal Jordan attempted to revive and rescue the Lost Lanterns months or years later.

Not the answer you're looking for? Browse other questions tagged dc comics character-identification green-lantern blackest-night or ask your own question.