What happened to the plans for a 3D re-release of Star Wars?

Back before Disney bought the franchise, Lucasfilm was working on re-re-remastered versions of the 6 Star Wars films that were supposed to be released in theaters - this time in 3D! 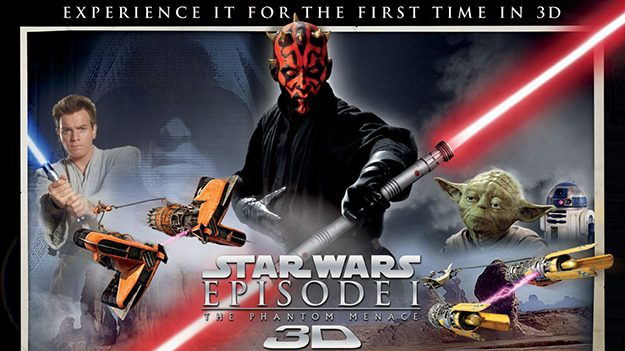 If I remember right, Episode I was released but I lost track of the project and had completely forgotten about it by the time news broke that Disney would be making a sequel trilogy. I assume Disney scrapped the project with the idea that releasing new Star Wars would be better than re-re-re-releasing old Star Wars but I never heard anything official.

Is there any concrete word from Disney/Lucasfilm about what happened to the project and why?

The original, official statement on StarWars.com from January 28, 2013, now available only on archive.org:

Lucasfilm has decided to postpone this fall's scheduled release of Star Wars Episodes II and III in 3D. Given the recent development that we are moving forward with a new Star Wars trilogy, we will now focus 100 percent of our efforts on Star Wars: Episode VII in order to ensure the best possible experience for our fans. We will post further information about our 3D release plans at a later date.

Some additional information from Disney's 2013 annual report following the acquisition of Lucasfilm:

Which suggests that the short-term value of updating the original films was limited, which is supported by Disney's statement in the annual report that they planned to focus on original content:

Our success in building a robust pipeline of original Star Wars content for various platforms will be an integral part of our long-term strategy to leverage the franchise across a variety of our businesses, from theme parks to consumer products.

One can surmise, for example, that creating a 3D version of Attack of the Clones for which you have to share the revenue doesn't help you sell new toys when you already have a 2D version. In contrast, making a new movie or TV show gives you something you own 100% of the rights to as well a whole new variety of spinoff toys and theme park content, as we have seen.

Other answers like the one from @jeffronicus do a good job explaining that the project was killed with Disney's acquisition of the franchise.

Pulled from an archived copy of Celebration Anaheim's website:

RealD is working with Lucasfilm and Star Wars Celebration to bring the premiere of Star Wars: Revenge of the Sith in 3D to the fans in style!

Fans attending the screening will receive a pair of collectible RealD glasses created especially for Star Wars Celebration, that they can take with them after the show as a souvenir.

The Star Wars movies are scheduled in the evenings as follows, on the Digital Stage (Ballroom 300) at Star Wars Celebration:

TL;DR: You are correct, the other 5 films were never re-released because they wanted to focus on the upcoming Episode 7

Originally all 6 films were to be released in 3D as reported by hollywoodreporter in 2010. The Phantom Menace was released in 3D as you mentioned, and I can confirm this personally as well; I saw it in theaters.

After this was released there were still plans to do the same to the other films, but these were canceled. It was reported by independent in 2013 that the plans to do the same to episodes 2 and 3 had been canceled, in order to focus on the then in production episode 7, which was incorrectly reported to be another prequel (I am unaware if at that time that was Disney's plan or not, but obviously it's not what happened). While the article didn't mention the plans for the original trilogy, it is safe to assume that they were canceled for similar reasons since they were never released at all either.

49
How can I watch the pre-"Special Edition" Star Wars?
30
Why did Disney cancel "Star Wars: The Clone Wars" TV series?
25
How well known were the events of the original “Star Wars” trilogy in the general galaxy? Or was it all about clandestine special operations missions?
21
Can Disney undo Lucas's changes to the original Star Wars films, now that they own the rights?
3
Does Leia understand the Binary Language of droids?
10
Was lightsaber physics planned from the start, or was it retconned later, possibly due to a "Discovery" episode?
4
What Star Wars footage shot for one film was reused in a later film?
39
When was Rey’s lineage decided?