In all versions, Tony's various armor is capable of firing off multiple energy attacks, from microwave to light, heat, electrical, sound wave and frequency, plasma bursts and focused laser. His arguably most iconic are the unibeam, a powerful charged blast fired from his chest, and the repulsor blasts he uses as standard attack.

So what exactly are the repulsors, anyway?

Humans can be hit with them and knocked out, but not cleaved in half or burnt, so it's safe to say they are not plasma or lasers.

We see this happen both in the comics and especially in the films; there, Tony says that it is "patented repulsor technology", and beyond offensive capabilities, Tony uses them to stabilize his flight and increase speed.

Is there any canon information as to what exactly repulsors are?

In MCU canon we have very little to go on, on what the repulsor's actually are. When describing the Jericho missile system he states:

Tony Stark: Is it better to be feared or respected? I say, is it too much to ask for both? With that in mind, I humbly present the crown jewel of Stark Industries' Freedom Line. It's the first missile system to incorporate our proprietary repulsor technology. They say the best weapon is one you never have to fire. I respectfully disagree. I prefer the weapon you only have to fire once. That's how Dad did it. That's how America does it.

The accompanying book, Phase One: Iron Man, gives a little more of a description on this scene but not much at all again.

“With that in mind,” Tony continued, “I present the crown jewel of Stark Industries’s Freedom Line of armaments. This is the first missile to incorporate my proprietary Repulsor Technology—or RT, as we like to call it. A breakthrough in energy control and guidance.”

He also gives a little description of how they can be used in Iron Man 2 when talking to Ivan. However, this doesn't really give us any information on what the repulsors are again.

Tony Stark: Pretty decent tech. Cycles per second were a little low. You could have doubled up your rotations. You focused the repulsor energy through ionised plasma channels. It’s effective. Not very efficient. But it’s a passable knock-off.

That's it, as far as I'm aware, of information on what the repulsors are in the MCU; so not much at all. Turning to the comics though and we do get a bit more information. The Iron Manual (1993) does give quite a nice description of what they appear to be: 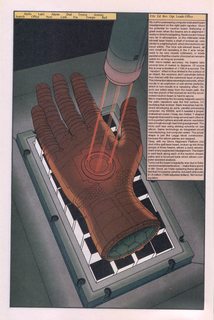 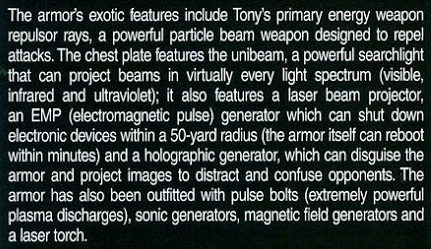 Lastly, The Official Handbook of the Marvel Universe Issue #5 gives information on what the repulsor's are (bottom right of the image). 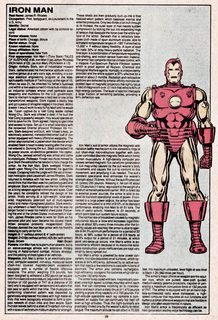 The armour's major offensive weapon are his repulsor rays, which are pulsed, laser-path guided, medium-density, plasma projectors, capable of generating a maximum concussive force of 150 pounds of TNT.

This appears to be low temperature plasma in some sort of self sustained magnetic confinement that would purely deliver kinetic energy without thermal damage such as a bullet. However the sustainment of the temperature would require massive amounts of power.

Well Valorum did the leg work so he should get the credit. I'll list it here so that it gets approved it'll at least be a question answered. According to the links provided by Valorum: 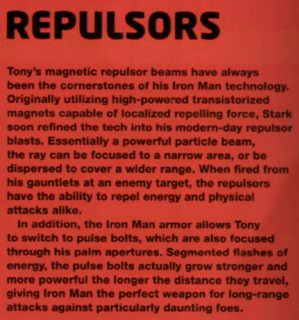 Iron Man's repulsors have been either/both plasma discharges or particle beams. Now as to whether either of these forms of energy can be de-tuned enough to hurt a human without causing massive damage I'll leave to comic book physics.