The main character is a retired knight and was given land after he retired. He's very strong and uses a big axe. He found a village that is hidden with magic in that land and tries to cooperate with them. Later on, he gets a horned girl from that village and now he tries to build his own city. He tries to increase his city's population later on.

The manga you are looking for is The Population Of The Frontier Owner Starts With 0. "Dias The Blue" And A Blue Horned Girl, also known as Ryoumin 0-nin Start no Henkyou Ryoushusama.

The main character, Dias, was called a hero and given lands as thanks and recognition of his unparalleled service during the war. The lands, however, were nothing but grass as far as the eye could see.

After a day or so, the horned girl, an oni called Aruna, finds him to determine if he is a friend or foe. After determining Dias is a friend, she takes him to the chief of her village. Dias and the chief then talk and determine the villagers are not subjects of Dias, and the chief explains the magic hiding the village.

Dias then goes about trying to build his and care for his own village as he is supposed to be the feudal lord of the area. After talking with Aruna he figures out he needs to start by setting up buildings, or at least getting supplies, before trying to get people to join his new village. After that gets set up, people slowly join his village. 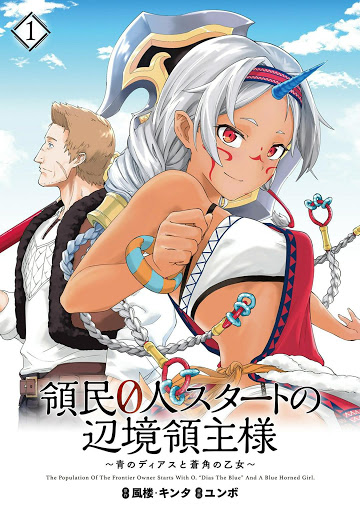 As you said, the main character is a retired warrior given a land by the kingdomn, there is however only a small tribe of Oni inhabiting the region where he finds that horned girl you speak of. 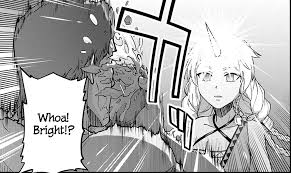