Can a lightsaber hold someone up?

If you wedged a lightsaber between other sabers or into a material that a saber can't cut well, could you safely dangle off the handle without breaking it, like some sort of climbing spike?

Canon preferred, but Legends acceptable (since I don't recall anyone trying this in the movies).

Since two lightsabers can parry each other and you can apply strength on it without breaking the hilt, you can do that as well. You just have to see the screen rotated by 90°.

Anyway, according to Legends:

Once focused by the crystals, the plasma was sent through a series of field energizers and modulation circuitry within the emitter matrix that further focused it, making it into a coherent beam of energy that was projected from the blade emitter. The blade typically extended about a meter before being arced by the blade containment field back to a negatively charged fissure ringing the emitter, where it was channeled back to the power cell by a superconductor, completing the circuit. This containment field also caused the blades to make contact with other lightsabers blades without passing through like other forms of energy. This trait is seen when lightsaber wielders can block and parry other lightsaber blades.

A lightsaber blade was a mass-less form that neither radiated heat nor expended energy, other than that emitted as visible light, until it came into contact with something solid. The power of the energy blade was so great that it could cut through almost anything, although the speed through which it cut depended on the density of the subject.

When cutting through dense material, the immense electromagnetic field generated by the arc caused resistance rather than letting solid matter enter and interrupt the arc. This gave the blade a feeling of being solid when immersed in dense material. Rarely, some solid materials could actually pass through the electromagnetic field and short out the arc. Other electromagnetic energy fields and coherent energy were also repelled by lightsabers' arcs. These include most force fields, blaster bolts, and other lightsaber blades.

According to the description, if your lightsaber is stuck with something that prevents the saber itself from cutting through, you can apply force to the hilt - and so dangle from it.

Wookieepedia isn't exhaustive in canon as it is in Legends for that matter, but the effects of the description above can be seen in various scenes. 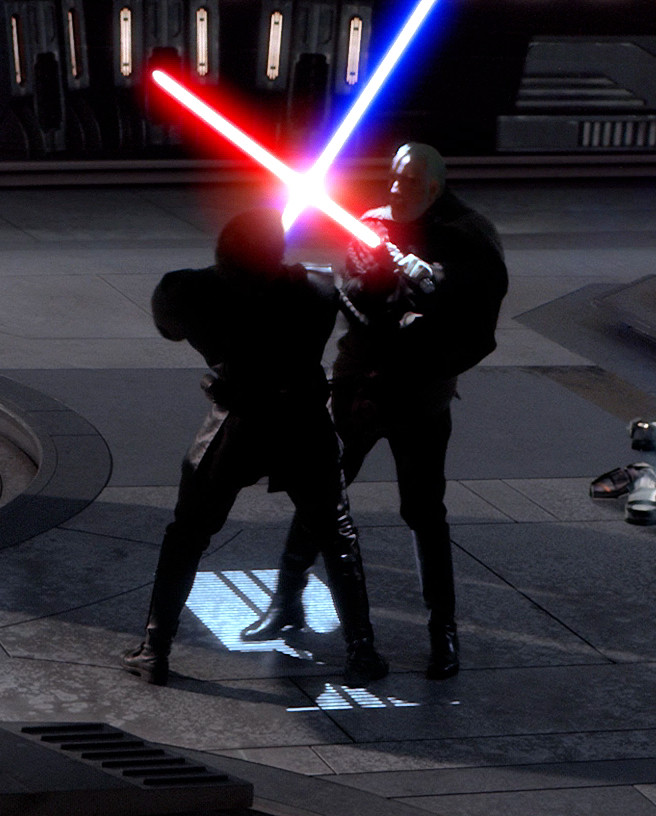 In this scene we can see Darth Tyranus trying to overwhelm the young Skywalker during a lightsaber fight with mere physical strength one their lightsabers are "in contact".

As neither of their lightsaber break during this, it's safe to assume you can apply strength on the hilt of a lightsaber to prevent falling without break the lightsaber itself.

Yes, in the Clone Wars saga Jedi could stop themselves by using their lightsaber to slow the drop or opposing force against them.

6
Can a lightsaber hilt be made out of cortosis?
5
Can a Lightsaber cut through Laminanium?
12
Which weapons can stand against a Lightsaber?
21
Which predictions of The Last Jedi: Darths & Droids Bingo were correct?
6
Could a lightsaber be used as a cane?
16
Which predictions of The Rise of Skywalker: Darths & Droids Bingo were correct?
13
When did we first see a purple lightsaber?