I distinctly remember as a kid in probably the mid-90s watching a series of one-off sci fi shorts. Quite dark / hard sci fi. Kind of a manga vibe but not necessarily Japanese. I seem to recall they (or at least this one) had little / no dialogue? Almost certainly Channel 4 / BBC2.

I remember one in particular about someone (maybe an assassin?) who had to keep shooting a crane so it wouldn't dock with her escape pod while she was trying to finish something against the clock. I'm pretty sure she died in the end.

I think this might be Æon Flux. According to Wikipedia it was shown on BBC's Liquid Television.

In the mid-1990s, the BBC showed the Liquid Television shorts, which included all of the Æon Flux shorts.

This is one of the characters from it which might match the style you remember. 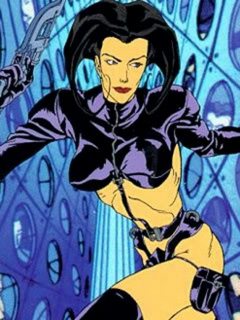 42
Identifying a story about a girl named Sarah who finds out she is a robot
12
Sci-fi/fantasy TV pilot from the 90s about a frontier doctor
7
Teenagers recruited for a fight, have to find armour made of gold/silver alloy
8
Woman knows a group of boys is taken over by aliens because they don't check out her breasts
7
Sci-fi movie identification: on TV in early 2000s or earlier - cannibal alien family
9
Identify a film with a scene containing extreme decompression
5
90s sci-fi cartoon with girl fighting robots on level 11
13
Fantasy film where dwarfs are turned to stone, and then used as bowling pins at a regal party
12
Girl becomes a tree and then ends up with losing her arms/branches