80's-ish sci-fi movie with guy/car saving a girl (cyborg?) and car chase at the end of the movie

It was either a guy had to stay with his car to stay alive (the car was how he recharged himself because he was part cyborg)—or—the car had a guy's consciousness in it.

The guy/car was trying to save a girl (who was possibly a cyborg girl). The vehicle had weapons built into it if I remember correctly, and at the end of the movie there was a big car chase scene with them trying to escape. They escaped, but either the guy/car or the girl was injured in the process, and it ended without you knowing if they'd make it.

I don't remember much else, other than the ending bits. I was little and stayed up late watching it with my dad. I got down a rabbit hole today finding "Robot Jox" while browsing, and I started remembering all the old '80s movies we rented from Blockbuster that were sci-fi. I remembered watching this movie, although it may have been on tape on regular TV for a weekend late night movie. (We didn't have cable growing up.)

This might be The Wraith, which features a souped-up car and driver on a mission. The driver is not actually a cyborg—although he certainly looks like he could be one. 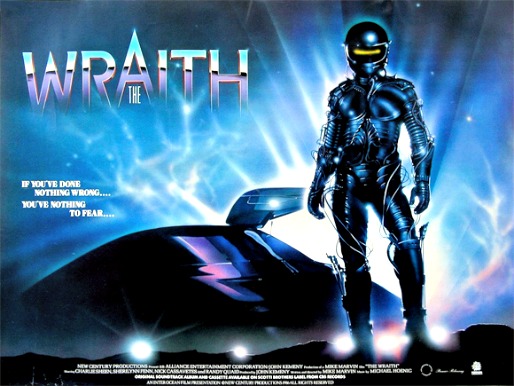 No, he's actually a ghost. (Nor does he actually look this cool in the movie. The helmet Charlie Sheen wears really to be a pretty ordinary black motorcycle helmet.)

Charlie Sheen and the car have come back from the netherworld to rescue his girlfriend and get revenge on the criminals that killed him. Due to their shared otherworldly nature, he and the Dodge M4S Turbo Interceptor are tied together in a fundamental way, although he is able to pass it on to his brother after his work in this world is finally complete.

In the town of Brooks, Arizona, Packard Walsh, the leader of a gang of car thieves, coerces people with sporty cars into racing for pink slips. He controls everyone through intimidation, including Keri Johnson, whom he views as his property. Keri's boyfriend James "Jamie" Hankins was mysteriously murdered, leaving no trace; Keri, who was with him, was hospitalized with no memory of the traumatic event.

Jacob "Jake" Kesey arrives in Brooks riding a Honda XL350R Enduro dirt bike. He befriends both Keri and Jamie's brother William "Billy" Hankins, who both work at Big Kay's, the local burger drive-in; they later meet up at a sun-and-swim gathering on a local river, where Jake is seen to have knife scars on his neck and back.

Packard's control of the illegal races is suddenly over when the Turbo Interceptor appears out of nowhere. The mysterious driver of this supercar is covered head-to-toe in black body armor and a black race helmet. The armor is adorned with metal braces resembling those worn by victims recovering from severe physical trauma. The driver challenges Packard's gang to race, explosively killing Oggie Fisher and later Minty in high-speed, fiery crashes which leave their bodies untouched except for burned-out eye sockets. Sheriff Loomis and his lawmen are always in hot pursuit, but the Turbo vanishes in a cloud of glowing light.
...
After Packard witnesses Keri kissing Jake, he kidnaps her from Big Kay's, beating up Billy when he tries to intervene. When Packard tells her they are going to California, Keri stands up to him and says she will never love him. Just as he gets out of the car and draws his knife, the Turbo arrives and Packard takes up the race challenge, only to be killed like the others. Sheriff Loomis calls off the hunt for the mysterious driver, observing, "Roadblocks won't stop something that can't be stopped”.

As Keri arrives home that night, the Turbo pulls up, and the armored driver emerges, transforming into Jake. Keri realizes that Jake is actually a returned version of her dead boyfriend Jamie, who admits "This is as close as I could come to who I once was". He then asks her to wait for him because he has one last thing to do.

I found the whole film here.

Found this going down my own rabbit hole. Mine was Circuitry Man (1990) which apparently has a sequel. Can't say if either is your answer, but maybe it will be for the next guy, and maybe they'll know.

The titular circuitry man and the main antagonist are cyborg types who can jack-in to vehicles to operate them and remotely use weapons. Each has a blonde female companion in a Mad Max type setting. The ending really doesn't fit, but it's very much in line with the mentioned Robot Jox / Blockbuster viewing.

6
Movie featuring a little girl and cyborgs, with an old -west feel
33
Title of a time travel movie involving a boy in alien armor and a girl?
8
Movie from the 70s or 80s that had a Cyborg
3
Part-machine scavenger with a red eye trying to save a girl from a tank with spikes and saws
13
A dark French movie about a little girl, a big guy, and a mad scientist
7
Cyborgs chasing humans for parts
13
Low budget D-list movie with werewolf, emo guy, and mystical girl of his dreams
6
Movie played on Sci-Fi about people with blue or green blood
8
B-class SF horror movie set on post-apocalypse Earth with a group against a killer-cyborg
5
80's/90's anime, robot car fight, including a silver Beetle-like car with yellow wheels and a spinning device to destroy other cars