I am trying to find a short story about aliens that take over the world's government. The premise is that humanity finds a species at a similar level of technological development. Earth's fleet takes off to fight, but simply disappears, while the alien fleet takes over the world (peacefully, since no one is around to protest). The government is benevolent, and the quality of life on Earth increases dramatically. It turns out that Earth's fleet had performed a similar operation on the alien planet. Both organizations seek highly motivated and idealistic individuals to replenish their ranks and perpetrate the ruse.

The story is told from the point of view of one such highly motivated candidate. He was brain-washed to believe that he belongs to an anti-alien insurgency, and discovers the truth throughout the story. His companion is an alien female, whom he has to transport somewhere in secrecy. Throughout the story, he meets common people that pretty much unilaterally support the new overlords, and realizes that the insurgents are in the minority, but tolerated/manipulated as a necessary evil.

One of the minor plot points is the construction of a highway around the entire globe, that was shown to have created gainful employment for a significant portion of the population, and made travel and trade that much easier for the general population.

The aliens as described as nearly human, but with blue skin. At least the females have partially shape-shifting ability.

I don't remember the exact format of the story (novel, novella or short story). I read it in an anthology some time within the last 10 years, but the story could be much older.

I believe you are remembering the novelette "The Alien Rulers" (1968) by Piers Anthony. It was later expanded into the novel Triple Detente (1974), where it became chapters 4 through 6. (Chapters 1-3 backfill the creation of the cross-rulership system, and the chapters from 7 onward detail the problems when a 3rd race is encountered.)

The novelette deals with a revolutionary, Richard (Dick) Henrys and his co-option by Bitool, the Kazo overlord of his region (America, North-Central). It starts with a discussion, in lieu of an interrogation, and the subsequent assignment of Henrys to be the caretaker of Serena, the first female Kazo to visit Earth.

His sense of honour sees that he keeps her safe from the other revolutionaries, and she and the retired master-sergeant they shelter with give him perspective to analyze his revolutionary impulses. (Which he incidentally discovers may have been planted in the first place.)

Master-sergeant Notchez (ret.) worked on the Global Highway, a project instituted by the Kazo, and it earns a couple of pages of description.

Ultimately Henrys comes to see that people, in general, are happy enough under Kazo rule, and actually approve of them individually. Notchez' grandchildren are even quite enthusiastic about meeting Serena.

The revolution falls apart because the revolutionaries are unable to gain any popular sympathy for it, and the Kazo have all successfully hidden from them anyway. Henrys meets up with Bitool again in his office, deliving Serena back to him, and is recruited to join the human rulers of the Kazo homeworld.

"The Alien Rulers" was anthologized twice, in Space Wars (1988) and Invasions (1990). You might recognize one of these covers: 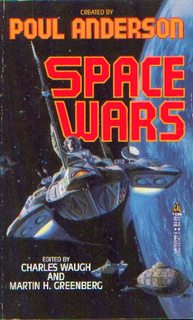 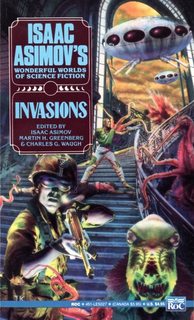 18
Novel about interstellar war: Both sides win, both sides think they lost

14
Short story about a man filling gas on a planet where aliens used to live
10
The A-Z book of Science FIction
9
Earth occupation/invasion book I read in the 90s
4
Alien race (possibly feline) takes human captive en route to final battle for Earth, fleet uses relativistic velocity to destroy alien armada?
22
ID: Duck-shaped aliens accidentally cause nuclear war and winter, wiping out humanity
32
Old story where aliens sell humans some machines to heal anything, and then disappear with their loot before we realize we've been scammed
10
Science fiction book series about aliens that look exactly like humans, protagonist tries to rescue her brother from a government camp ran by aliens