It starts out with some confusion, but the gist is that an entire class of students on an aircraft are abducted by aliens. I believe that the wings of the aircraft are also cut off, and the cabin is placed in storage. The students believe they are being attacked by robots, so they defend themselves and cut off the wires controlling them.

It is eventually revealed that the aliens arranged for their flight and to be abducted, and that the robots are used for maintenance and were to help with communication.

The shuttle is deposited on a stalk attached to an artificial planet. The planet has dinosaurs. The aliens look like starfish, but they uploaded their minds into computers a real long time ago. And now, due to problems of maintenance and software glitches, they are dying out. So they want the human students to take care of their starship, teach them all they know, before they cease to exist.

The artificial planet's surface is mostly dirt. But underneath it's a shell of diamond. In the center of the planet is a black hole, which the aliens use to provide earth-normal gravity and power. Robots can be controlled remotely.

The students divide into groups. One is a bully. The others don't trust the aliens no matter what. The rest make due to best they can to learn as much as possible and to operate the robots.

I never finished the book. Can anybody help me?

This is Charon's Ark by Rick Gauger. 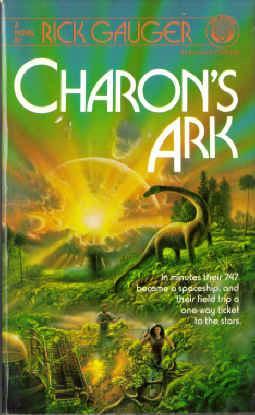 A planeload of high-school students, their teacher, and the airliner’s crew are hijacked in midair by an alien spacecraft. The aliens take them to their crazily-malfunctioning starship Ark, which we know as the planet Pluto and its moon Charon.

The aliens are referred to as the Charonese and they look like pink starfish. One of them says:

"Yes. Our biology is, or was, different from yours in that way, at least. Would you like to see a picture of me?"

Emma came fully awake, realizing that some kind of a break-through was at hand. "Yes, I would, please!"

This time the alien did laugh, human laughter. The screen on Emma's communication terminal lit up with a picture of a pink starfish lying on a beach. In the background, surf rolled up the sandy shore and clouds floated in a blue sky. The only unearthly thing about the image was that the starfish was lying on a plaid blanket.

"This is a recording of me on vacation, basking in the sun," the Charonese said."

It's Charon that has the diamond shell with a black hole at the centre. Another of the Charonese describes it as:

The alien voice interrupted. "His name is Charlie. Charlie is saying an appropriate question. It is true that Charon has some of the appearance of a natural planet. Nonetheless, nevertheless, however, it is not a natural planet, it is an artifact. Charon is a hollow, spherical shell. In the approximate center of the space inside the shell is a gravitational singularity, or black hole, which radiates enough energy to warm the shell.

6
Looking for the name of a scifi comic strip from a book-for-boys book
5
Aliens abduct mathematician, astronomer, woman
21
Anthology book with story about robotic bombers
15
Trying to remember a book about a human male travelling to alien planet
8
Aliens abduct humans to crew a ship and represent Earth in an ongoing war. Humanity doesn't have space faring capabilities