Does the Hulk's skin repel bullets?

I'm watching the Iron Man: Armored Adventures cartoon and the Hulk is just standing there taking bullets. It seems like in every version I see, he can withstand a massive amount of damage. Is his skin thick enough to repel bullets?

The Hulk is only as bullet-proof as the writers decide they want him to be. The general answer is, he is either completely bullet-proof or he regenerates so fast, no injury matters.

It depends entirely on which version of the Hulk you are viewing and how each writer/editor team wants to portray the character with the range varying widely. While the Marvel Wiki lists all of the weapons the Hulk is immune to this list varies widely depending on the needs of the comic industry.

What this usually means is when the Hulk becomes so invulnerable that he cannot be harmed or challenged effectively by writers, he is usually changed in some fashion to make him more vulnerable so that writers can create stories with conflict that matters. They will often:

from the Marvel wiki

Superhuman Durability: In addition to great strength, the Hulk's body possesses a high degree of resistance to injury. The Hulk's skin is impervious to conventional blades, adamantium and vibranium being amongst the very few metals that are truly capable of piercing his skin. The Hulk is capable of withstanding high caliber bullets, powerful explosives, pressures extremes, falls from orbital heights [202][197], maximized heat without blistering, maximized cold without freezing, and great impacts

I'd assume that this means that conventional bullets won't penetrate the skin. However, Adamantium or Vibranium bullets could probably do it.

In the Marvel Cinematic Universe, the answer is also yes. In The Avengers, we see him shrugging off a barrage of heavy machine gun fire; it doesn't seem to do anything but annoy him (the shooting starts at about 2:45 into the video).

I believe the obedience disc he was forced to wear is the reason his powers were limited, that is why he was known as the Green Scar, as his regeneration powers stopped working. Once the disc was removed they kicked in.

By the time the psychic monster Onslaught was created, the Hulk's power level had risen to a level so great, he was basically invulnerable to all forms of conventional harm up to and including nuclear weaponry. He was called Worldbreaker Hulk and emitted powerful waves that were theorized to be able to actually destroy the World.

You've mixed up the timelines. Onslaught was about a decade before World War Hulk. I believe Hulk has always been resistant to nukes. The Worldbreaker is a persona of the Hulk that manifests himself during periods of extreme anger, when he was told of Meek's betrayal or believed Betty and Rick had been killed. In the Worldbreaker state he emits high levels of gamma energy. 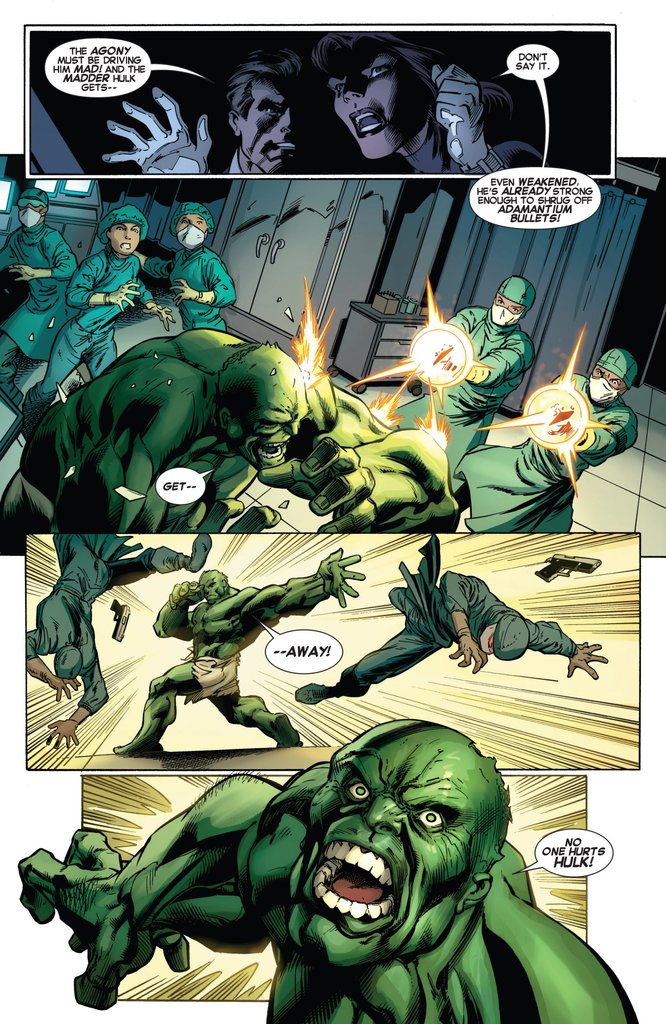 5
Does Hulk have joint problems?
8
How would the Hulk's transformation affect an artificial joint?
4
Can the hulk be affected by poison?

148
Is there an official Marvel Cinematic Universe viewing order?
24
Why is the Hulk's skin green?
9
Does Banner's strength affect the Hulk's?
5
Does The Hulk's anger have a limit?
42
How does Vibranium work?
7
Why does Skye / Daisy / Quake use such a limited version of her power when fighting?
7
Which 1970s Spider-Man cartoon had sentient alternate dimension plants?
3
Is Iron Man: Armored Adventures a purely stand alone series, or does this version of Tony exist in some other universe outside of 616?