Has Zero-G Football game play ever been defined, or is it just a open ended plot device in the show?

Has Zero-G Football game play ever been defined, or is it just a detail in the background scenery? I'd like to know where it was played, and what the positions were. A source quoting the rules would be smeggin' great, but I haven't been able to find one.

As pointed out by @Hassleinbooks, the game is extensively described in the official Red Dwarf Smegazine - Vol. 1 #8.

You can see in the panels below that the rules are essentially nonsensical, featuring a five-dimensional ball, a toroidal playing field, played over three quarters and involving the extensive use of bazookoids, megaton nuclear weapons(!) and something called a "Putsley". 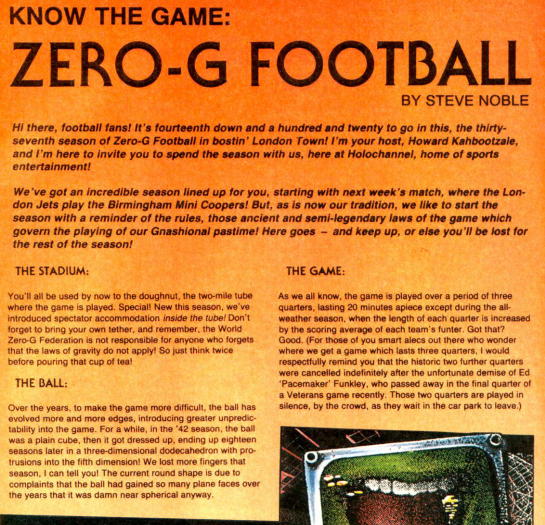 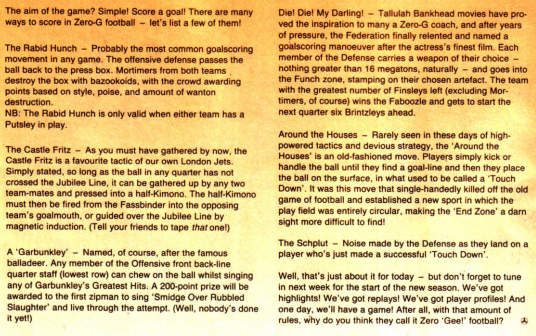 The exact rules were never explained during the series. However, it is clear from all photographs, pictures and terminology depicted throughout the series that Zer0-G Football is basically American Football in space, or at least in a zero gravity enviroment (roof attack suggests that it is played in some form of enclosed arena). Also it is clear that the 'Roof Attack' position where Jim Bexley Speed played was loosely equivalent to 'Wide Receiver' in American Football. I'm afraid that's all we know about it folks! - Hope this was helpful.

Issue 1.8 of the Smegazines has a full story on the rules and regulations of the game. You can find it here: http://hassleinbooks.com/pages/resources.php