We recently got some Harry Potter themed wallpaper for our downstairs toilet in the style of the Marauder's Map. Everything seems normal about it except for one room named on it as "Hespprivs Hall" (which actually returns no results on Google). 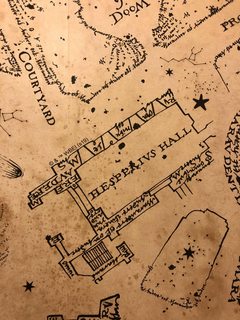 I doubt the wallpaper is "licensed" but I recognise most of the other big names on it so it seems odd to have a "made up" one on there too.

It is apparently named the Hesperius Hall

The Hesperius Hall is an antechamber to the main entrance of the Clock Tower at Hogwarts Castle. It is located opposite the Vastus Vestibule and can be seen on the Marauder's Map replica.

It would appear this is Hesperius Hall (translation done on the fandom wiki so no idea if it is accurate).

The Hesperius Hall is an antechamber to the main entrance of the Clock Tower at Hogwarts Castle. It is located opposite the Vastus Vestibule and can be seen on the Marauder's Map replica.

It appears on the official Marauder's Map replica from the films. See this Pinterest post for an image of the relevant part of it (bottom left, to the left of the Clock Tower): 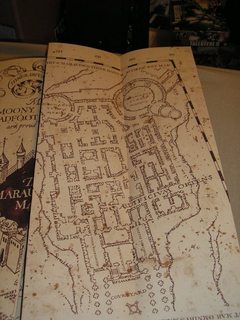 It apparently also appears in the film, Harry Potter and the Prisoner of Azkaban, but from checking a few scenes I can't spot it so I imagine it appears in the credits.

Not the answer you're looking for? Browse other questions tagged harry-potter hogwarts marauders-map or ask your own question.