How big is Mogo?

Green Lanterns come in all shapes and sizes but Mogo, the sentient planet, is certainly the biggest one. However, while I've read a lot of comic issues featuring Mogo (Geoff Johns times and afterwards, notably), I don't remember its size/radius ever being discussed.

Browsing around, I can't find more info on that. The question was also asked (but not answered) on ComicVine.

There might not be any canonical statement about the size of Mogo.

It depends on the properties which Mogo is depicted as having in the comics.

Part One: Is Mogo depicted as being spheroidal in shape?

Yes, according to the image in Mogo's Wikipedia page.

If you go by a scientific definition of a planet then Mogo must be large enough that its gravity has pulled all its mass into a roughly spherical shape.

If a planet is made of weak material, like ice for example, it will be pulled into a spheroidal shape with a much smaller mass and diameter than if it was made of a strong material such as iron.

The International Astronomical Union voted for an official definition of a planet within our solar system on August 24, 2006. This definition does not apply totally to exoplanets in other solar systems like Mogo.

The IAU therefore resolves that planets and other bodies in our Solar System, except satellites, be defined into three distinct categories in the following way:

(1) A "planet" is a celestial body that: (a) is in orbit around the Sun, (b) has sufficient mass for its self-gravity to overcome rigid body forces so that it assumes a hydrostatic equilibrium (nearly round) shape, and (c) has cleared the neighbourhood around its orbit.

(2) A "dwarf planet" is a celestial body that: (a) is in orbit around the Sun, (b) has sufficient mass for its self-gravity to overcome rigid body forces so that it assumes a hydrostatic equilibrium (nearly round) shape, (c) has not cleared the neighbourhood around its orbit, and (d) is not a satellite.

(3) All other objects, except satellites, orbiting the Sun shall be referred to collectively as "Small Solar System Bodies".

What about exoplanets, planets in other solar systems? So far the only definition of exoplanets is:

In 2003, a working group of the IAU released a position statement[88] to define what constitutes an extrasolar planet and what constitutes a brown dwarf. To date, it remains the only guidance offered by the IAU on this issue. The 2006 planet definition committee did not attempt to challenge it, or to incorporate it into their definition, claiming that the issue of defining a planet was already difficult to resolve without also considering extrasolar planets.

Objects with true masses below the limiting mass for thermonuclear fusion of deuterium (currently calculated to be 13 Jupiter masses for objects of solar metallicity) that orbit stars or stellar remnants are "planets" (no matter how they formed). The minimum mass required for an extrasolar object to be considered a planet should be the same as that used in the Solar System.

Substellar objects with true masses above the limiting mass for thermonuclear fusion of deuterium are "brown dwarfs", no matter how they formed nor where they are located.

Free-floating objects in young star clusters with masses below the limiting mass for thermonuclear fusion of deuterium are not "planets", but are "sub-brown dwarfs" (or whatever name is most appropriate).

So Mogo should have a radius of at least 470 kilometers, and thus a diameter of 940 kilometers, or possibly a bit less, if it is to be in hydrostatic equilibrium, and thus satisfy the minimum size requirement for being a planet.

Part Two: Is Mogo depicted as having a solid surface?

Mogo is a sentient and living planet. It is technically genderless, but it is often casually referred to as male. When it is desired, its affiliation with the Corps is shown with foliage arranged into a green band, marked with the standard Green Lantern Corps lantern symbol, circling Mogo's equatorial area...

...At the same time, Mogo has allowed alien races to live on its surface and has been willing to change its climatic conditions to suit them.

So the answer seems to be yes.

But the largest known planets are all ice giants or gas giants, and do not have solid surfaces like Mogo is probably depicted as having. The least massive known ice giant in our solar system is Uranus, with a mass of only 14.6 that of the Earth.

So the possible mass range for a planet with a solid surface like Mogo is probably depicted as having would be from about 0.00016 of Earth's mass to about 14.6 times the mass of Earth. That gives a mass range with the most massive possible solid planet "only" 91,250 times as massive as the least massive solid planet.

Part Three: Is Mogo depicted as being naturally habitable for humans?

At the same time, Mogo has allowed alien races to live on its surface and has been willing to change its climatic conditions to suit them. These inhabitants of Mogo may not always know that their home is alive and watching them.

So Mogo is probably habitable for various alien races, and quite possibly also for humans.

Then the possible range of Mogo's mass, diameter, volume, and density, etc., would be much greater than if Mogo was naturally habitable for humans.

For example, Mogo might have been created by an advanced alien civilization.

Mogo might be much smaller than a planet that is naturally spheroidal, having been shaped into a spheroidal shape by the advanced aliens. The aliens might have built artificial gravity generators to enable Mogo to have a sufficiently high escape velocity to hold onto its atmosphere, and magnetic field generators to give Mogo a magnetosphere, etc., etc.

So someone could find the largest measurable object ever seen on Mogo and see if that object is visible in pictures of the entire planet Mogo. If that object is not visible when the entire planet Mogo is seen from space, then they can measure how many pixels wide an image of Mogo from space is. If that object would appear as a different colored dot if it was even one pixel wide in an image of all of Mogo, one can then calculate that the diameter of Mogo must be at least as many times the diameter of that large object as the diameter in pixels of the image of Mogo is.

If, for example, a building on Mogo is 1,000 feet wide, and that building does not show up as a dot in an image of all Mogo that is 47 pixels in diameter, the diameter of Mogo must be at least 47,000 feet.

And on the other extreme, the hypothetical super advanced alien society that may have created Mogo might have taken a gas giant planet, got rid of most of its hydrogen and helium atmosphere, modified what was left into a breathable oxygen-nitrogen atmosphere, and probably installed anti gravity generators on Mogo to reduce its surface gravity so that humans and similar lifeforms could survive there. Thus on the other extreme Mogo could have tens or hundreds of times the diameter, volume, mass, etc. of Earth.

All of the above discussion is based on assuming that Mogo was constrained by real-world science. But in comic book science-fiction, the fiction part varies greatly in how good it is, but is almost always a lot better than the science part. I don't know if any superhero comic book writer ever bothered to think whether something was scientifically possible. Thus it is possible that some comic book mentioned the size of Mogo, and if so would be the canonical size of Mogo in all comics that were published within the same continuity, and that size, however much or little it was scientifically possible, is the canonical size of Mogo within that continuity.

Mogo is at least Earth-size, if not a "superearth". 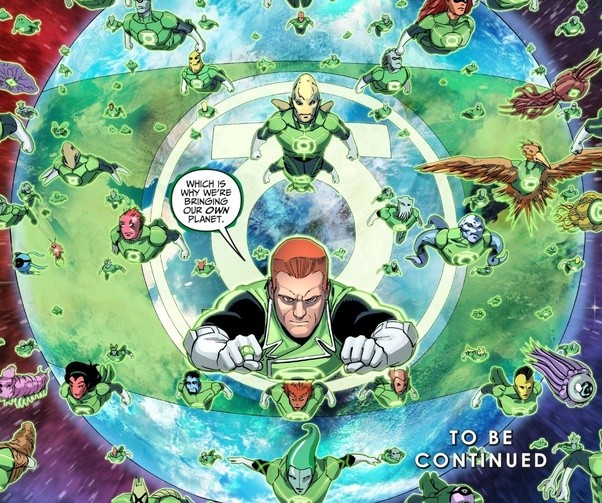 Mogo as a sentient planet has been shown to be able to control his own weather, gravity/density, and other planetary-level activities. But even during the Kyle Rayner years (the 1990s, without any other Lanterns), a depowered Mogo was shown as a planet with around normal Earth gravity.

During War of the Green Lanterns, Mogo was detonated by Indigo Tribe John Stewart blowing up Mogo's internal Green Lantern ring. Still, Mogo managed to recover his pieces within months, in time for the next crossover storyline. 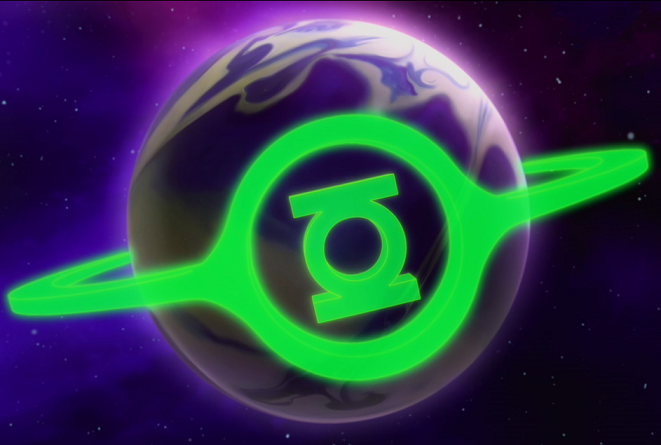 While this is not canonical, it is from observation of Mogo over the years in DC Comics. 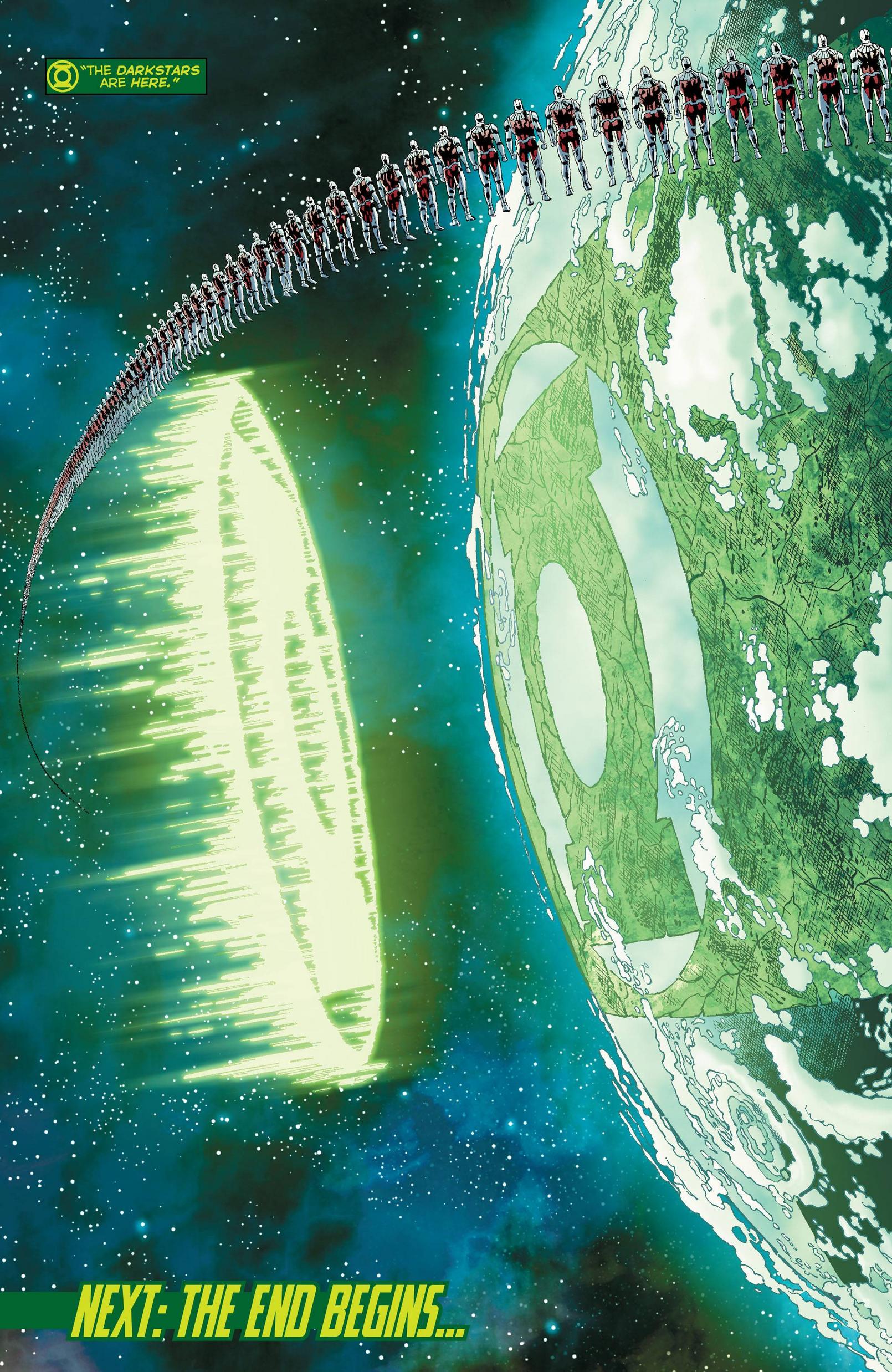